Let’s face it: online dating isn’t easy. As a newcomer to this weird and wonderful world where nothing is what it seems, it can be tough getting to grips with the game. There’s a lot for you to learn, young grasshopper – fortunately, you’ve joined the right dojo.

Here’s a scenario that you may be familiar with: you’ve been talking to someone for a couple of days now, and things seem to be going well, but when you ask them out, they say they’re busy. What does this mean? What’s the best way to respond to that?

Worry not, because we will answer both of those questions and more in this post.

If a girl says she’s busy, does that mean she’s rejecting you? 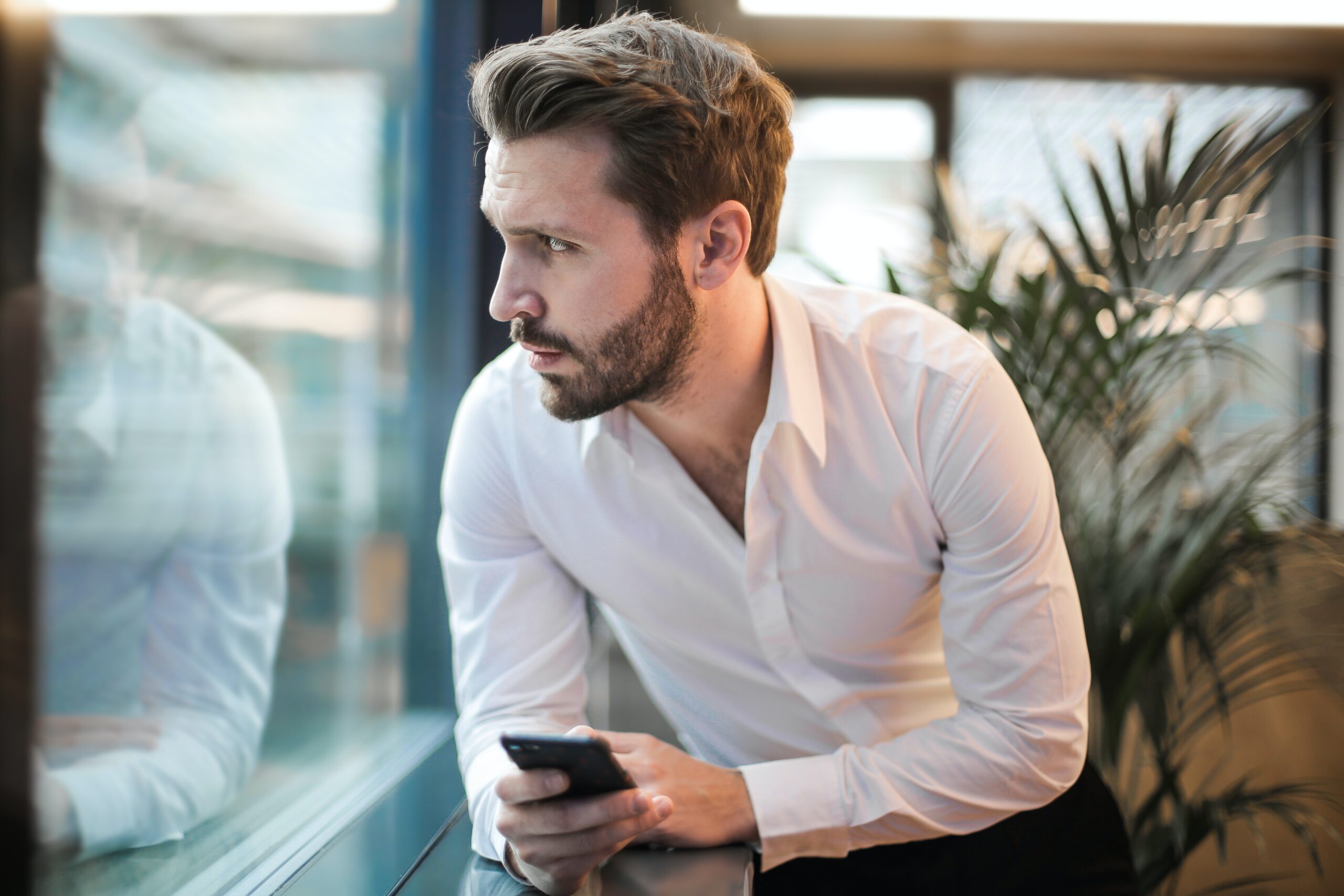 Rejection can be tough to deal with, but at least it leaves you with a sense of closure. When someone says no to your advances, there’s usually no question about their motives or where their feelings lie.

When it comes to online dating, you’ll have to learn how to read between the lines and quickly pick up on subtle cues. It’s sink or swim out there. 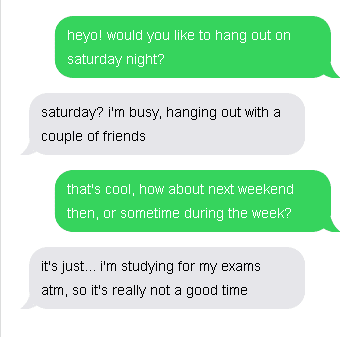 When a girl says that she’s busy, there are a few possible meanings that you can infer. She may not be interested in you, or she may have found someone else. Alternatively, she may actually be busy – the trick is knowing how to read the subtext.

Try to imagine this: you’ve just been contacted by someone on the internet – they seem nice, and they’re pleasant to chat with, but you just don’t feel drawn towards them in any sort of meaningful way, no matter how much they compliment you. Still, they’ve been nice, and you need to let them down easily. What would you do?

This is where the “I’m busy” excuse really comes into its own. The simple truth is that most of the people you meet on online dating sites are decent human beings who only want to connect with like-minded people whom they find attractive. You could be the sweetest guy they’ll ever meet, but they won’t want to go out with you if they aren’t attracted to you.

However, because most are good people, they don’t want to tear your heart out either. Instead, they’ll tell you that they’re just too busy to entertain a relationship at the moment. And that’s fine. 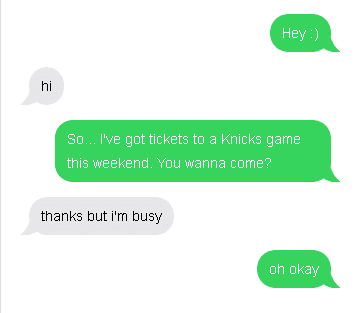 Additionally, people will usually telegraph their disinterest. Please take a look at your text conversations and take note of how they reply. Are their messages short and to the point? Do they initiate conversations or ask meaningful questions? If not, they were likely never interested in you, to begin with.

She’s Found Someone Else

Some people don’t realize how quickly things move in the world of online dating. Opportunities come and go at the speed of light, but you need to be a fast mover to seize them.

For example, you may have struck up a good rapport with someone on Tinder. The two of you may flirt back and forth, exchange compliments, engage in some good banter, the whole shebang. However, you may have waited too long to ask them out or give them any sort of sign that you’re interested in an actual, real-world relationship with them. So, little by little, they begin to withdraw, and by the time you’ve caught on, someone else has already swooped in and stolen their heart. 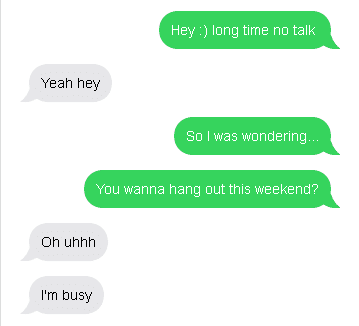 When this happens, the “I’m busy” excuse comes into play once more. Again, most people use this to avoid hurting someone else’s feelings. If you think you’re being lied to, consider the following: did you wait too long to ask them out? If so, how long – a week, a month, a year? What about their demeanor? Are they still enthusiastic, or have their replies grown shorter and shorter as time goes on?

It’s recommended that you ask someone out within three days of first speaking to them. You’ll need to move quickly, and try to find out about some of their hobbies and interests which will inform your date ideas and give them more of a reason to go out with you.

Of course, on the flip side of all of this, sometimes everything really does go well, except for the timing.

Yes, you heard us: sometimes, they mean it when someone says that they’re busy. This will usually only be the case if you’ve done everything right so far. That means establishing a good rapport, exchanging numbers within two or three days of connecting, and asking them out as soon as possible. 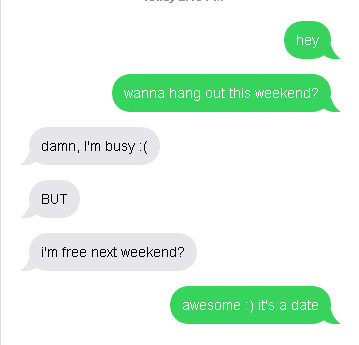 Additionally, if someone is interested in you, they will usually take the initiative to reschedule with you for a later date that suits both of your schedules. It would be best to use this time to come up with fun and unique date ideas. That means getting a sense of their interests and some idea of what their schedule is like. Once you’ve got all of that, you should be in the clear. Try to give them a variety of options for date, time, and venue without overwhelming them – too many ideas and they might not know when they’ll be free; too little, and they may not be available.

Learn my 4-step process for asking someone out

How should you respond when someone says that they’re busy? 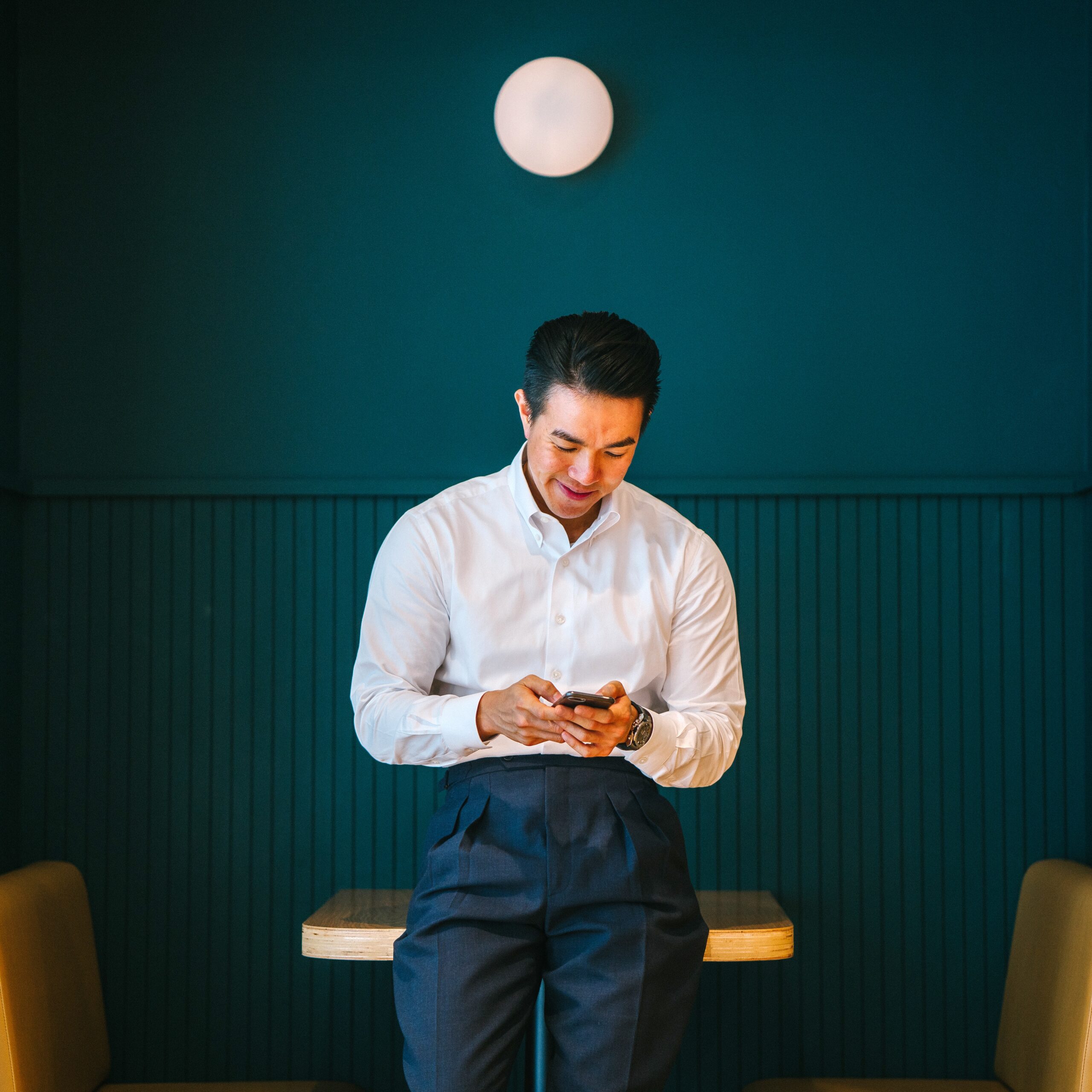 It can be pretty tempting to lash out at someone when they reject you, especially over the Internet when the veil of a screen protects you. It’s important not to act on these urges, however.

Instead, when someone tells you that they’re busy, you should first stop to determine what they mean. Are they subtly rejecting you and letting you down easy? Is it possible that they’ve found someone else? Or do they seem genuinely interested in you and are simply unable to make it?

Regardless, it would be best if you endeavored to keep a cool head. Don’t express any disappointment or anger. Instead, if you think you may have a shot, offer to reschedule your date and suggest an alternate venue or time to accommodate them better. 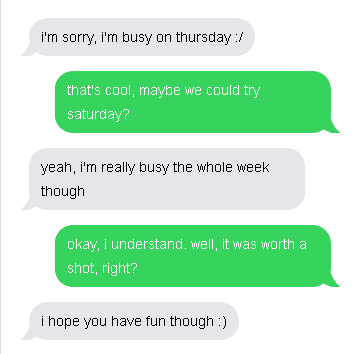 Otherwise, if it seems like a fool’s errand asking them out, let them know that there are no hard feelings. Wish them well and try to put them out of your mind. Remember, there are plenty of other people online for you to pursue. Don’t waste all of your energy crying over spilled milk.

What does it mean when a girl says no to a guy? 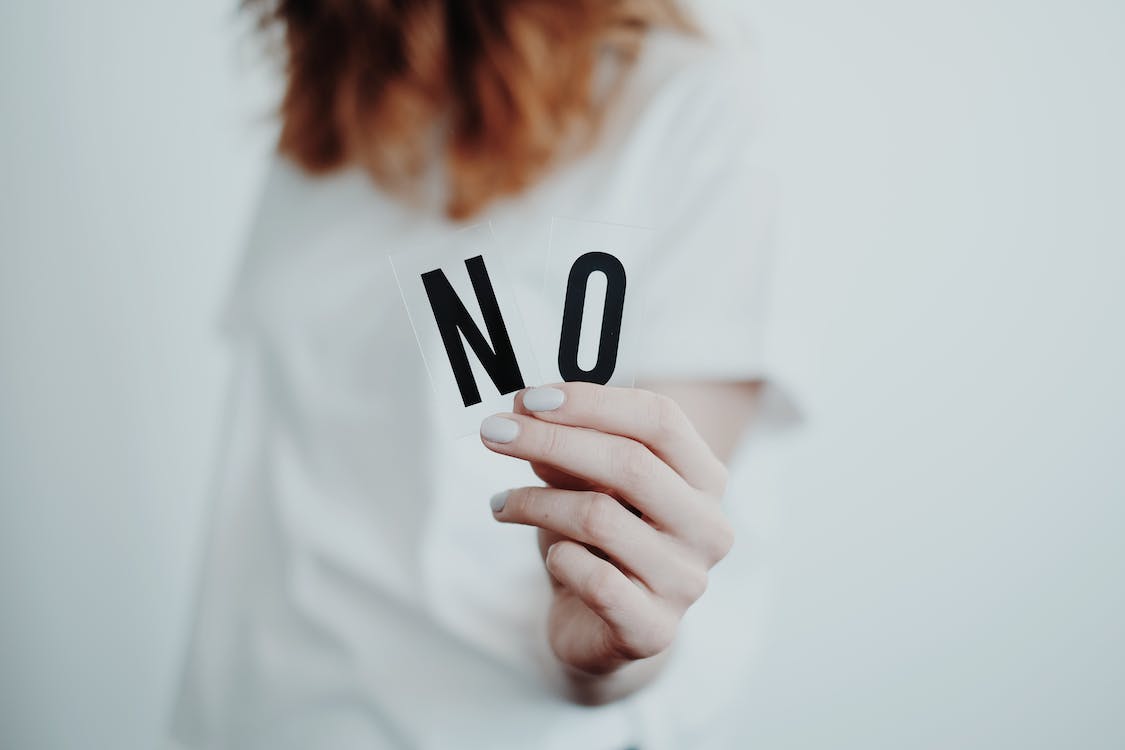 We get this question a lot, which is troubling because the answer should be obvious at this point. It means no if someone says no to you – whether you’re asking them out or propositioning them for sex. There’s no hidden meaning, no cryptic mystery for you to solve.

If someone says no to you, don’t lash out at them for not catering to your every whim and need. They’re people, too, not your puppets. Don’t be that guy.

How can you win over someone who is “busy?” 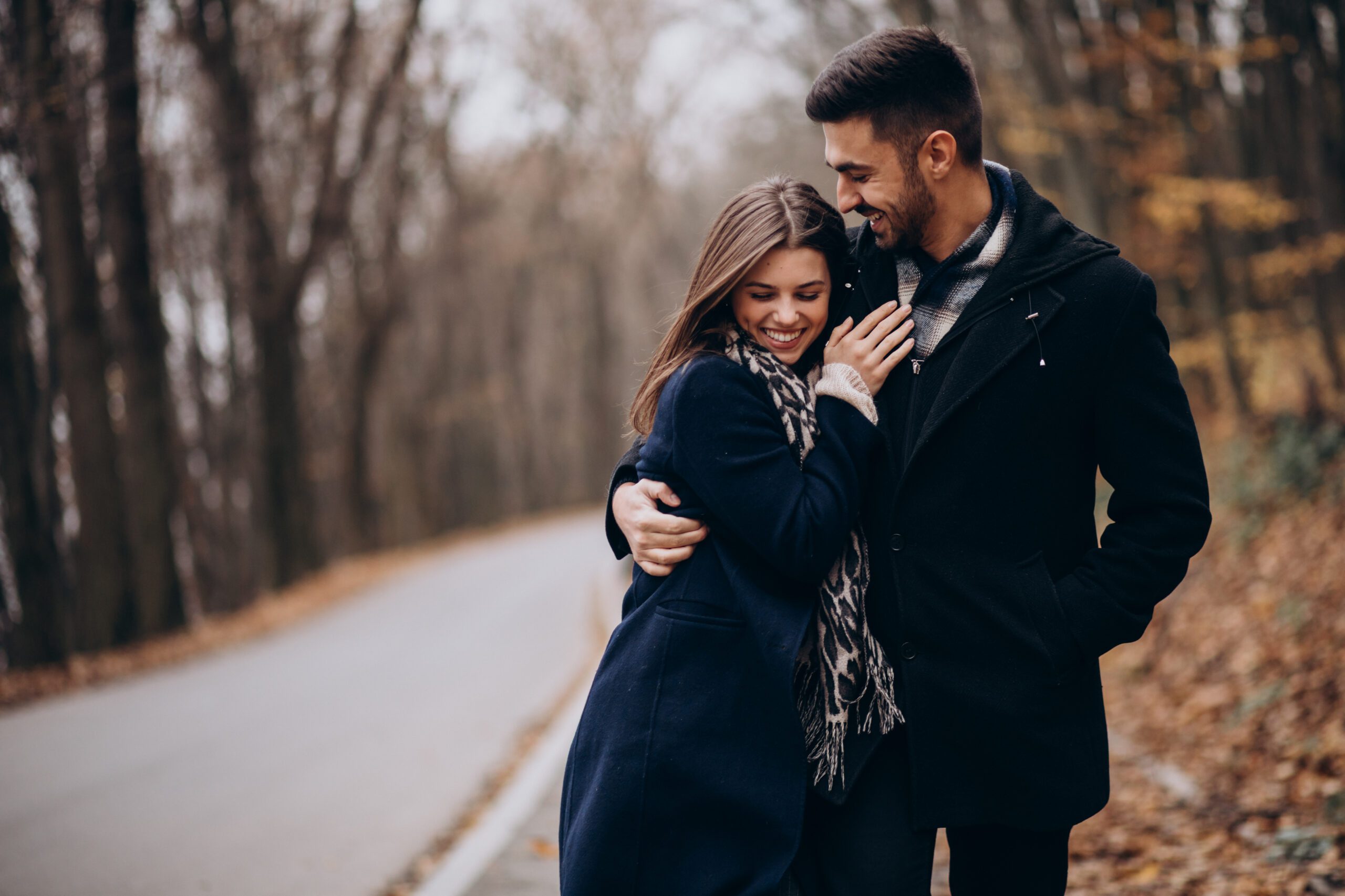 If someone tells you that they’re busy and express no real interest in seeing you, the best advice we can give you is to try and move on as quickly as possible and put them out of your mind. However, if you think that you may have a chance with someone even after they’ve told you that they’re busy, there are a few things that you could try.

No one likes a try-hard. While it may seem endearing at first, it gets old pretty quickly. Instead, show the people you meet that you’re comfortable with being yourself. Don’t try too hard to be a smooth-talking casanova. Keep conversations going at a pace that is comfortable for you, and draw attention to your own hobbies and interests instead of fixating on the other person.

There’s an unspoken rule when it comes to online dating. You should always ask someone out within three days of first speaking to them. That means exchanging phone numbers and organizing a date quickly before someone else steals their heart.

However, while you should always be proactive in asking someone out, it’s important not to insist too much. Nobody wants to feel pressured into a situation they may not be comfortable with. Ask them out, sure, but don’t stress it too hard.

Additionally, sometimes people will come around to liking you eventually – so long as you give them the time to figure it out for themselves. That means giving them space. Don’t spam-message them or message them every day if they don’t seem interested. Both of these things will drive them away.

Have Your Own Life

Try to show people that you have your plans and interests. Don’t obsess over everyone you meet. Invite them out to try out some of the things you enjoy, but don’t drop your own plans if they can’t make it.

Finally, take the time to touch up your online dating profiles and skills. Learn how to come up with solid openers and how to present yourself in an attractive way.

That should be everything you need to know about what it means when someone says that they’re busy. Hopefully, you’ll be able to take something meaningful away from this post.

Consider using our profile writing service if you need help with your profile. Additionally, we offer text message feedback which can greatly improve your conversational skills.