So, you’re out for drinks with your friends one night and you strike up a conversation with a beautiful girl. After some back and forth banter, you exchange phone numbers. She gives you a wink and says, “I’ll call you”. But, three days later and your phone has yet to ring.

You keep staring at the number on your phone wondering, “should I call her if she didn’t call me?”.

If this sounds like a situation you’re in, you’ve come to the right place. Let’s talk about if you should make the first move and call a girl, even if she didn’t call you first.

Should I Call Her If She Doesn’t Call Me? 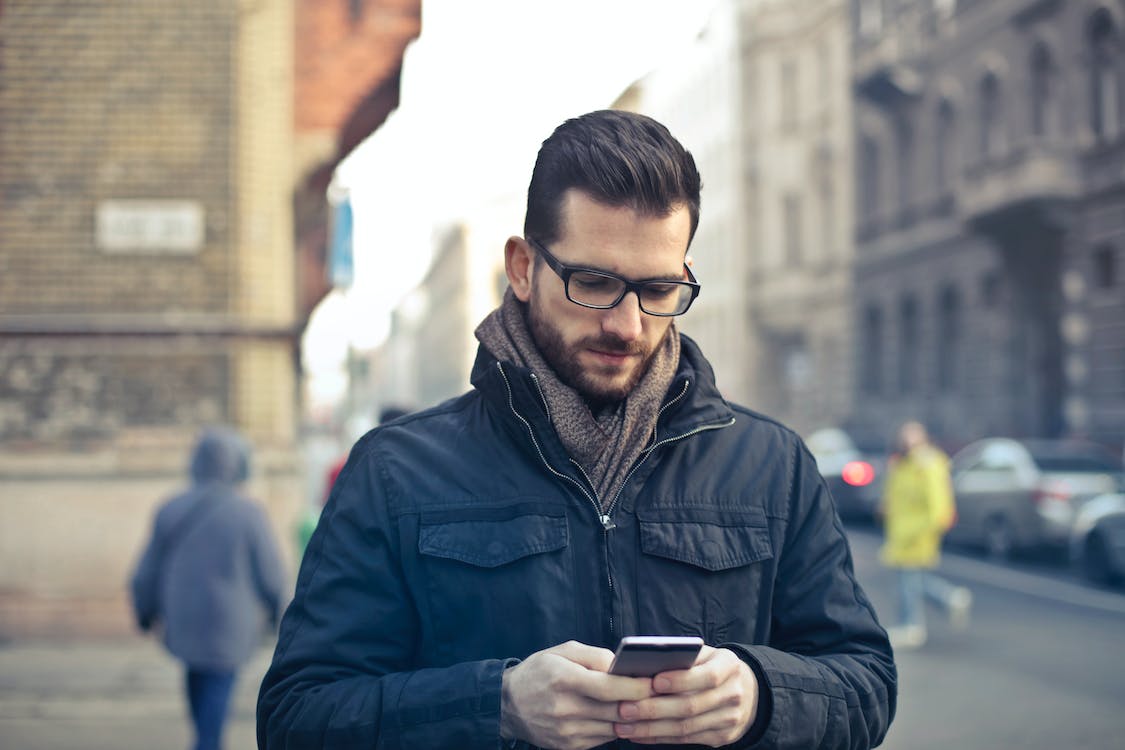 In short: yes, you should call her even if she doesn’t call you first. However, there is a fine line to balance.

Think about it this way: In the grand scheme of life, what do you have to lose? The worst possible outcome is that she tells you not to call again, and you know what? Now you have your answer. Life is too short to sit around waiting and wondering where you stand with someone.

If calling first sounds too intimidating, you could try shooting a text, instead. The same concept applies: either she will respond, or she won’t. Either way, you’ll have a clearer understanding of where this connection is – or isn’t – going. If you’re unsure what to say, head over here to get some help.

Don’t call or text more than once or twice if she doesn’t respond, though. If you do, you risk coming off as ‘clingy’ or overbearing, which is the fastest way to burn any future bridge with her.

Women appreciate a man that can give them space.

She Never Calls But Always Answers. What Does It Mean? 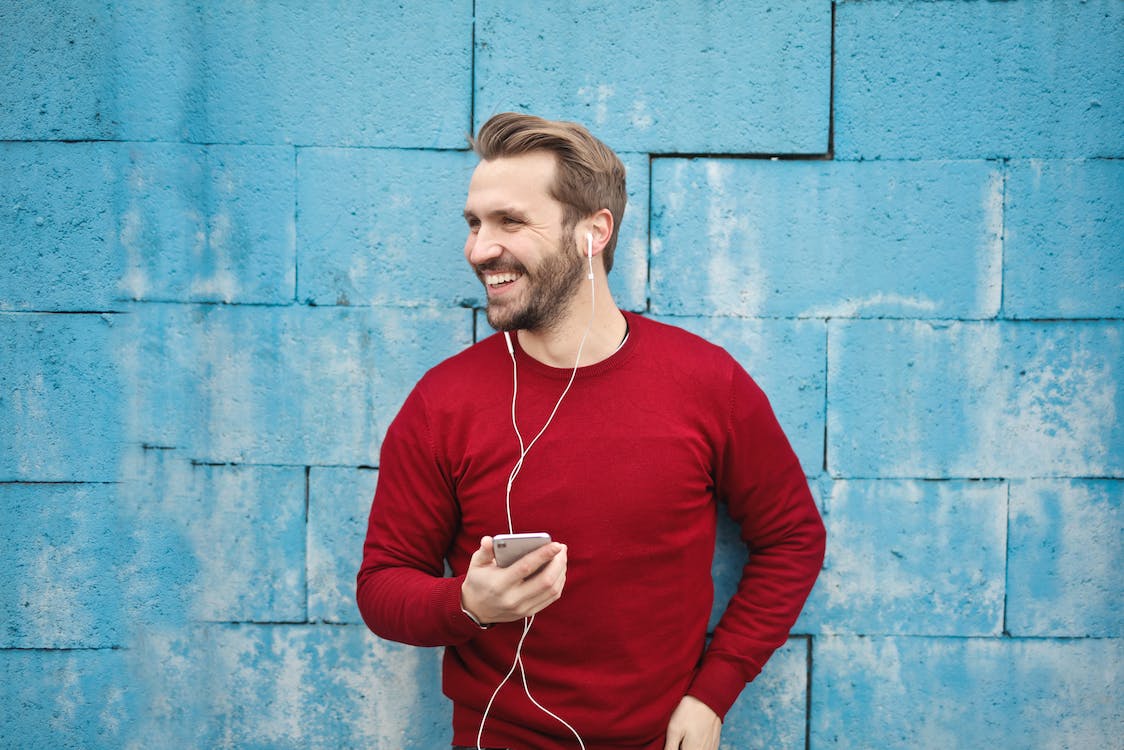 If she never calls first, but always answers, you may have a situation on your hands where she is interested in you, just not as interested as you are in her. She’s willing to pick up when you call but isn’t willing to put in the extra effort to reach out first.

Take a few days to evaluate this further. Don’t reach out first and see what happens. If she doesn’t make any contact with you, you’ll need to readdress if you’re willing to continue pursuing her – even without the reciprocated communication.

In addition, she may simply have an extremely busy life. Does she work overnights? Does she work somewhere she can’t have access to her phone? If this is a relationship you want to continue, don’t assume the worst right away.

Sometimes simply asking her the reason may help solve any miscommunication that is occurring. Perhaps she’s strictly traditional and believes the man should always be the one to reach out first. If you truly care for her, try clearing the air before ending communication altogether. Something as simple as this can help immensely: 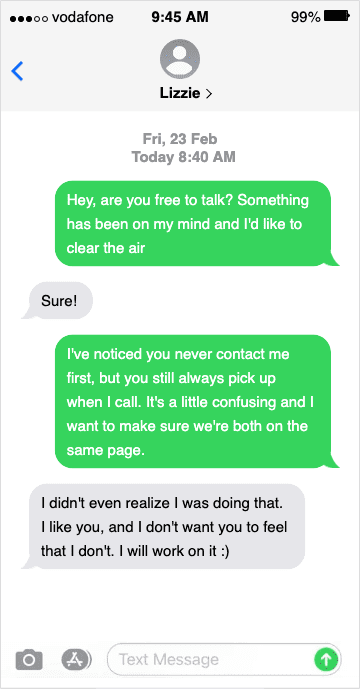 She Never Calls Me, I Always Call Her. What Does This Mean?

So, you have a girl you’re interested in but you’re always the one to make the first move. Being the only one in a situation to initiate contact can feel pretty discouraging. Does this mean she isn’t interested? Does this mean you’re in the friendzone?

There are a few reasons she may be withholding contact on her end: 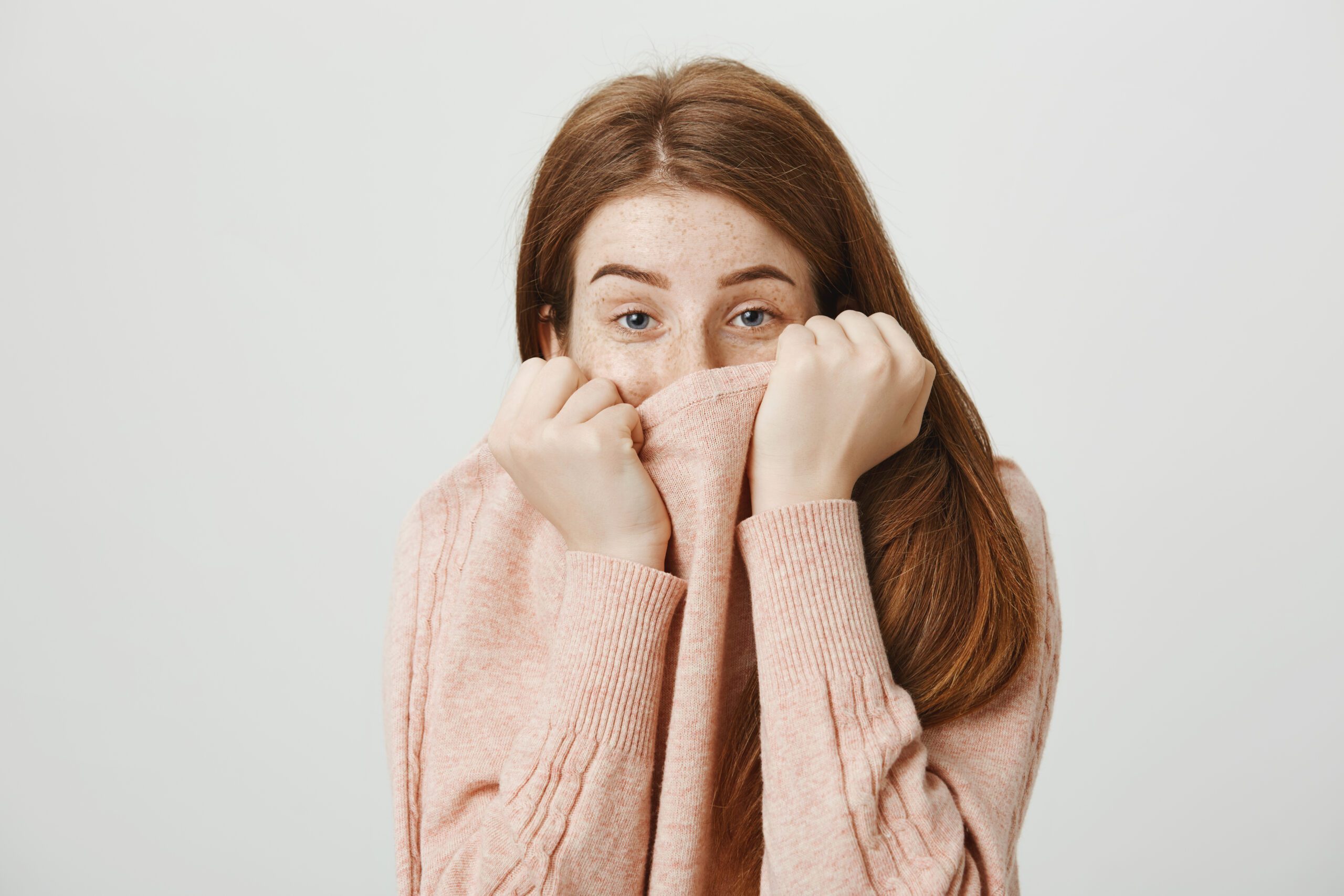 This isn’t an excuse, but more so an explanation. Some women are confident in their social skills and have no problem making conversation. Others may feel more comfortable texting, as it gives them extra time to think of a response. Not every girl enjoys phone calls, and in some cases, you may find talking on the phone results in a boring, dry conversation.

When women aren’t 100% sold on their feelings for you, they may not initiate contact, but still be open to flirting, or phone conversations. Some women need space and time, especially at the beginning, to figure out your intentions – even if they’re pure.

She Doesn’t Want To Seem Clingy:

Society has deemed any ounce of effort as “clingy” or “needy” and many girls are terrified of coming off as such. Women have strict texting etiquette to follow in order to not seem ‘crazy’ or ‘over the top’. While some women are exceptionally worried about seeming needy, or desperate, it’s often easier to just be upfront with your intentions. 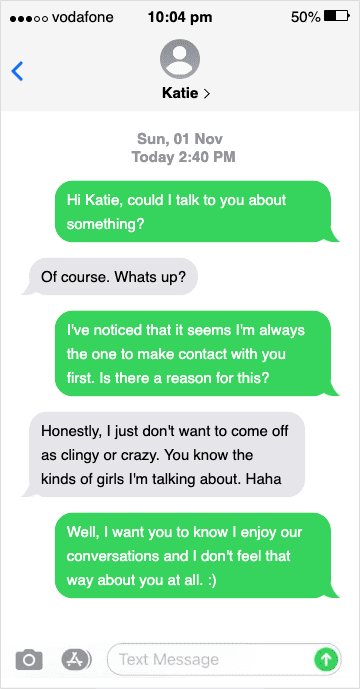 Take note in this conversation, that the sender wasn’t overly accusatory and asked to talk about an issue in a mature, adult manner. This person was upfront with a situation they noticed and didn’t beat around the bush. It allowed both parties to clear the air.

She Has Friendzoned You: 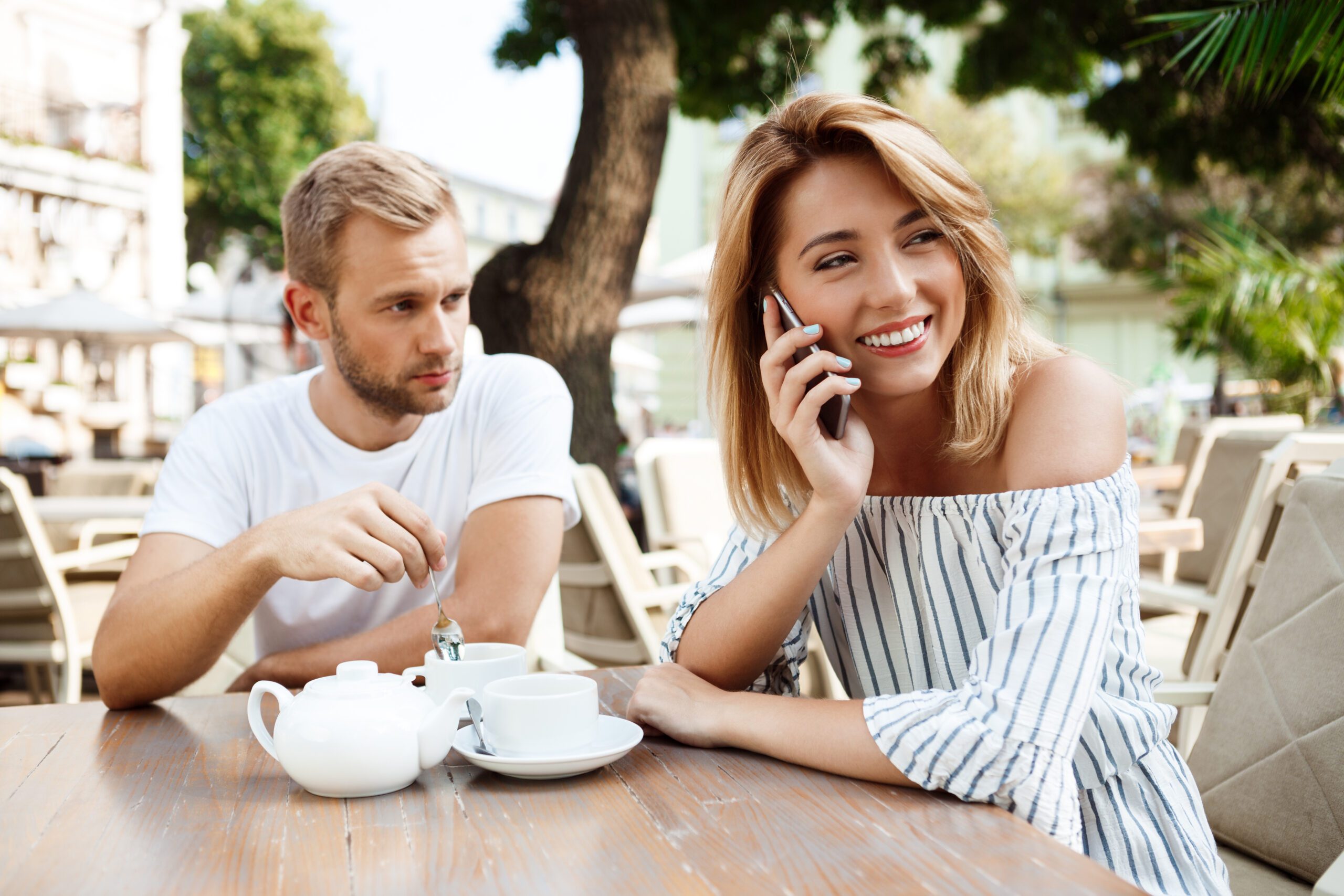 This may be hard to hear, but if she wanted to – she would. If you find yourself always making the first move without any reciprocation, she may just view you as a friend. Back off for a few days and avoid making initial contact first and see if she is willing to reach out, if not, then you are probably no more than a friend in her eyes.

Where Do You Go From Here?

If you find yourself stuck in a situation where you really felt like you had a spark with someone, but they never ended up calling you… What should you do? Let’s recap.

Think about this: what is the worst possible outcome that can come from calling her first? Sure, she may have a bodybuilder boyfriend that is ready to throat punch you, but that scenario is pretty unlikely.

Either she will answer and be excited to reconnect, or she won’t. If she doesn’t answer after one call, it’s safe to shoot her a text – but don’t overdo it. You may have just called her at a bad time, or she could be someone that doesn’t answer calls from numbers she doesn’t recognize.

Once you shoot her a text, you’ll get your answer. Either you will re-spark that connection, or you won’t. No matter what happens, you’ll get a much clearer picture of where you stand so you can decide to either move on or see where things go. 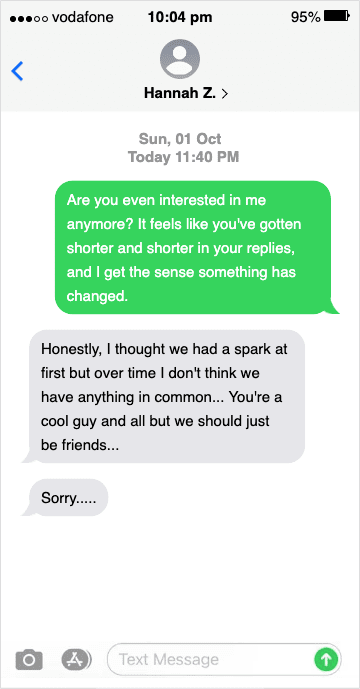 Now, if you’re talking to a girl and you notice the only time conversation happens is if you initiate it, there may be a few reasons for this.

Was she engaging at first, but over time became shorter and shorter in her responses? Women can be incredibly confusing, but this is where we help. If you’re unsure of where you stand and you’d like text message feedback from a professional online dating coach, our services can help guide you in the right direction. Not only can we give you advice, but we can also look to see any patterns or changes in behavior.

Have you recently found yourself in a situation where numbers were exchanged, but no phone call was made? As a man, should you call her – even if she hasn’t called you first? After a few days, if she still hasn’t called you, there is no harm in calling her first. Not only can this potentially keep the connection going, but you will also find out either way where you stand. Once you see where you stand, you can either move on, or keep pursuing her.

If you’re having trouble getting dates or matches, I can help. My professional dating profile services will help you to stand out and get more dates in no time.