So you’ve matched with a girl that’s funny and beautiful. You’ve been putting effort into the conversation, asking her questions, and trying to get to know her – but she’s sending short replies. Does that mean she’s not interested?

Fear not – there are several reasons a girl might respond with short messages. This guide will teach you why she’s sending quick replies and what to do to make the conversation more interesting. 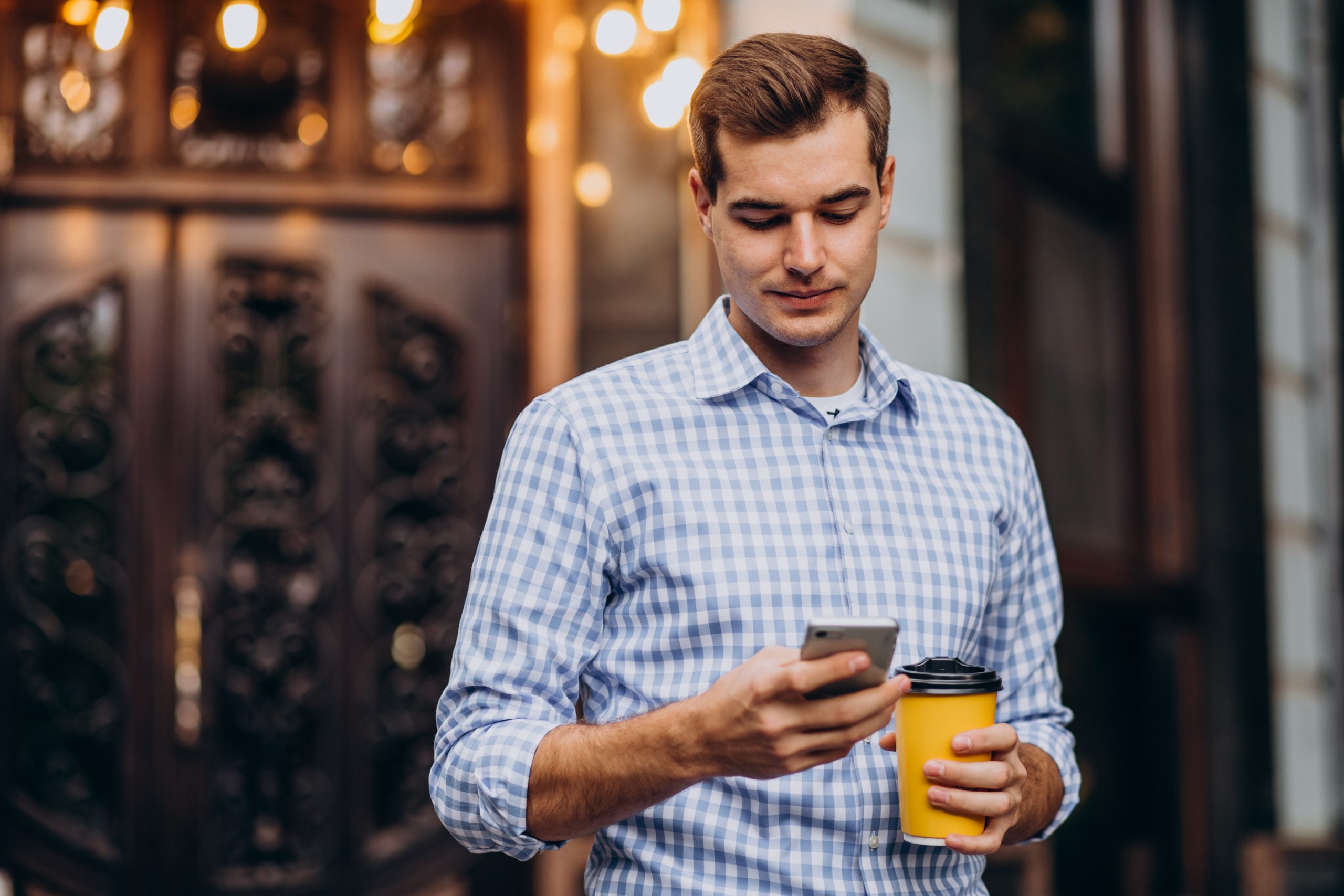 What Does it Mean When a Girl Texts You Short Messages?

When a girl replies with short texts, it most likely means she is busy with work, still gauging her interest in you, or unsure how to respond.

Your first thought might be that she’s not interested anymore. But there are a few other causes for short messages.

Why Do Girls Reply to Short Messages?

No, really. Have you ever been so busy with work, school, or something else that you just sent a quick response to a friend? The same thing can happen on an online dating app – in fact, it might even be more likely to. 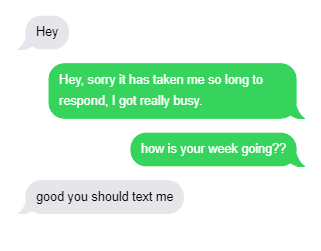 2. She’s Unsure How to Respond

Have you ever been so stuck on a message you started to stress? In those cases, sometimes a shorter message is the easiest way out. If you’re sending thoughtful questions and sharing, she might just be stressing about sending the right response and instead go for an easy short answer.

In online dating, some people choose to play it cool until they really know how they feel. It’s easier than getting invested only to be disappointed. Or, she might just not want to put in the effort and instead see what you bring to the table first.

How to Respond to a Dry Text from a Girl

If you’re chatting with a girl who is sending dry PMs for any of the above three reasons, you likely want to get the conversation going. There are a few ways you can revive a dying conversation.

1. Keep Up Your Efforts

First, remember not to give up after one or two dry messages. In some cases, it just takes some time for a girl to open up and feel comfortable chatting.

That’s not to say that you should talk for hours without any change in her messaging style. If you try some tricks and she continues to stay boring, go ahead and give another match a try. 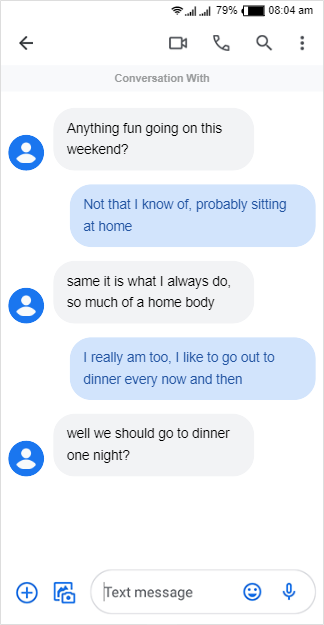 Even if the conversation is pretty dull, things might change as they did for this person if you keep putting in the effort!

Before trying anything else, change up your texting style. Your match might be responding quickly because she’s not interested in the questions you’re giving her or the things you’re talking about.

If you’re being serious, try making things a little lighter and funnier, and vice versa. Go for a killer conversation starter and things will go from there. 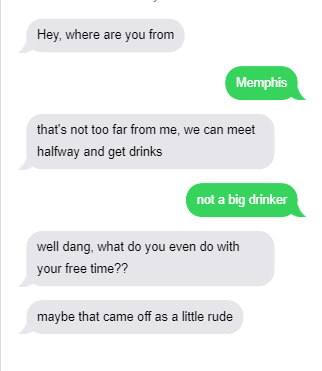 This guy is really struggling to keep the interest of his match. Instead of his quick jokes, he might try a more serious question or even a compliment to take things further. The truth is, this match isn’t into him. It would be better for him to spend time chatting with another girl that has more potential for a relationship.

3. Switch to a Phone Call or Date

Some people just hate talking over messaging apps. In fact, a lot of people hate texting and prefer to talk on the phone, video call, or have a real-life date.

I’ve experienced this in my own life. Once, I was trying to meet up for a second date, but the girl wasn’t very responsive over messenger. Finally, after I invited her over to my place to cook dinner together, she agreed and we met for a fun evening.

If you’re not getting a lot of traction with your messages, ask her if she wants to have a phone call or date and see if her style changes in person. You can even try audio messaging first! Ask her:

4. Kindly Call Her Out

This is either hit or miss, but the truth is that sometimes people don’t realize how they’re coming across. If you’re putting in effort and your match is coming up short, you can jokingly tell her as much. As long as you do so kindly, she might appreciate your honesty and give you a genuine response. Try something like: 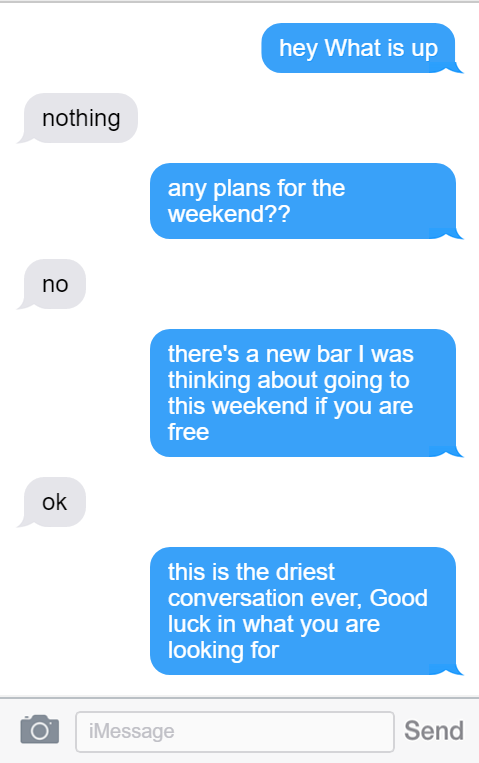 This conversation above is going nowhere and they should just part ways.

How to Respond to Short Texts

The best way to respond to short text messages is with a longer, thought-out answer. You might want to hit her back with a “Nice!” or “That’s cool,” but that will only end the conversation sooner. Instead, ask her to elaborate on her answer or start a different topic using a successful conversation starter. 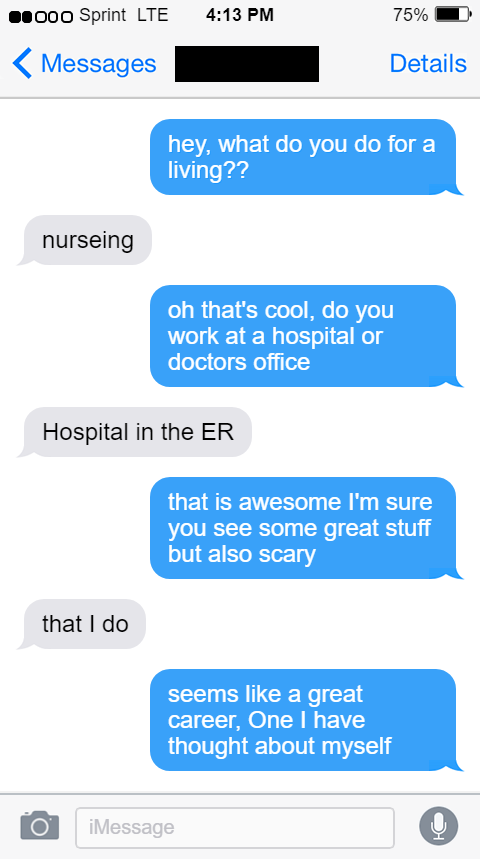 In this case, the guy is trying to engage her in a conversation but she isn’t interested. When she replied “that I do”, he could have asked her about some of the interesting stuff she has seen while working at the hospital. Or he can even be a bit flirty and tell her she is the cutest nurse he has seen all day.

What to Do When Your Girlfriend is Being Short in Texts

If you’ve already built a relationship with a girl but now it seems like she’s ghosting you, it can be really stressful. You might feel as though you did something wrong or like she’s losing interest.

Step one is to ask her about it. Check-in with how she’s feeling! Maybe she had a really stressful day and just isn’t in the mood for talking. Or, she’s upset about something and needs you to ask her how she feels so she can open up. If you want to figure out why her DMs are shorter and have a two-sided conversation, say hi and try asking her:

Her Texts are Getting Shorter

Even if you don’t already have a secure relationship with a girl, sometimes a person you’re chatting with will completely change their texting style. She may go from sending long messages to sending short, one-word answers. You’re left questioning if you’re boring her! 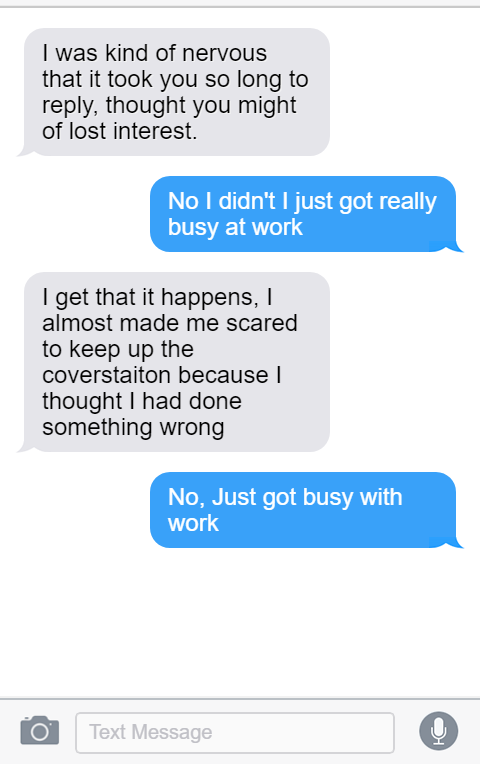 In this conversation, it was the other way around. But what he did right was be honest about his nervousness so she could let him know she was still interested in chatting.

Instead of jumping to the worst conclusion, try asking her about it. It’s always helpful to have an open and honest conversation, even with new, budding relationships.

Managing a one-way conversation is a lot of work for a single person. But there are plenty of reasons why a match isn’t responding with thoughtful answers, and that doesn’t mean she isn’t interested in you!

The easiest way to understand the mind of a match is to work with a professional dating coach.

If you’re looking to get more matches and dates, I can help. As a dating profile ghostwriter, I can help create an attractive profile that gets replies. I’ll also teach you some strategies you can use to maximize your online dating success.