Coffee Meets Bagel is one of the more popular dating sites out there, with millions of users all looking for the same thing: dates.

As such, you can expect the competition to be pretty stiff, especially if you’re a guy. There are times when things seem to be going really well, and others when it may seem easier to just log off and try to pick someone up at a bar.

In this post, we are going to describe some of the mistakes that you – along with plenty of other users – may be making, and what you can do to avoid them and find more dates on CMB.

Why Are You Not Getting Any Replies on Coffee Meets Bagel?

It can sometimes seem like more than half of your matches – as limited as they may be – act like bots, completely ignoring all attempts at interaction after the first few messages have been exchanged.

Chances are, however, that while some of your matches may very well be bots, it is more than likely that you may have unwittingly turned some users off to you.

Newcomers to online dating in particular are prone to a handful of conversational missteps that can easily give other users the wrong impression. Fortunately, correcting these mistakes is easy once you know what they are: being too forward; giving out too much information, and sending one-word replies can all be major date-repellants.

Here is what to do if you’re struggling with your conversations.

1. Don’t Be Too Forward Too Soon

Text messaging is great for quick and easy communication without too much hassle. More often than not, however, newcomers to online dating make the mistake of overcomplicating their messages, expressing too much in too small a space.

Of course, a lot of this is due to the limitations of text messaging. Without that face-to-face interaction, a lot of nuances are lost, and what you say and what you mean are often conflicting forces. You could very well make a joke, for example, only for it to be completely misinterpreted by the receiver.

Needless to say, conversations like this do not usually lead anywhere good.

That is not to say that text conversations cannot be deep and engaging, but the depth at which you connect with someone is often based upon your actual perception of that person, which can only truly be gauged in real life. As a general rule of thumb, it is better to keep your interactions light-hearted and fun until you meet up.

Text messages are better when they are short, sweet, and to the point without being too pointed at themselves.

Here is how to spark a conversation on Coffee Meets Bagel

2. Don’t Give Out Too Much Information

Online dating sites lend themselves well to casual conversation. CMB, in particular, does a great job of forcing users to organize dates and exchange numbers as quickly as possible by limiting the amount of time they have to chat with one another. With that being said, it is best to use this time effectively, building a rapport with your match as quickly as possible before asking them out within a day or two.

One thing that can quickly stop a conversation – and indeed, a potential relationship – dead in its tracks is oversharing. Many users are guilty of this but choose not to see it as a fault or otherwise deny it altogether. 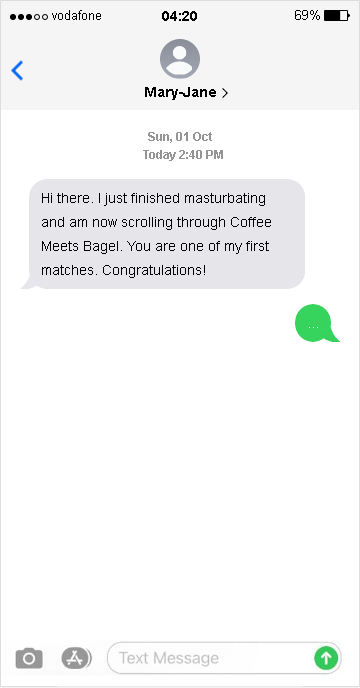 Honesty has its moments, but those are best left for three months into the relationship.

The desire to be open and honest is important in any relationship – but the relationship itself comes first. You do not want to share your deepest, darkest secrets with strangers on the Internet.

Again, the best thing you can do while texting a match is to keep your conversations light-hearted until you meet.

Learn what to do if a girl is slow to respond.

Conversations – even those that take place on the Internet – are two-way streets. Both parties need to be engaged and interested in a conversation to pan out the way you want it to.

Sometimes, however, people make the mistake of stifling the conversation before it even has a chance to pick up steam. This is usually because one of the participants is not asking questions, and therefore not allowing the other to offer their own input. 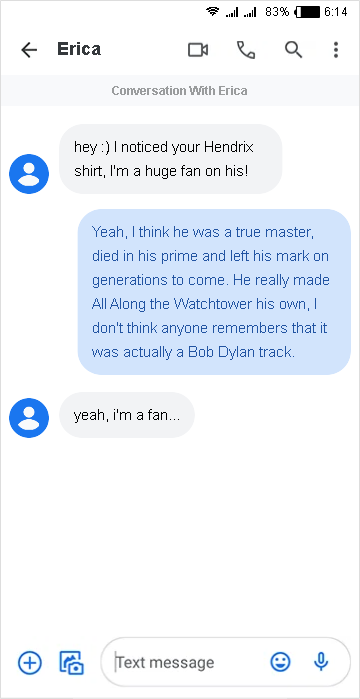 Allow your matches to give their own input, or be ready for them to leave you high and dry.

Everybody wants to feel heard in a conversation, even if it is fairly light-hearted. You may be guilty of never letting the other person speak, or offer their own opinions on subjects. For example, you may have a particular fondness for a certain band or singer, and spend the remainder of the conversation expressing this interest and never allowing the other person to get a word in edgewise.

Fortunately, if you ever catch yourself doing this, you can easily remedy the situation by asking the other person for their opinion. Rather than explaining why you like a particular band, for example, ask the other person what they think of them, or ask them who some of their favorite artists are. Do not go for the deep and personal questions straight away – you need to get to know them first. And remember the best question to ask is when you can meet.

Check out my guide on how to take your conversations to the next level.

Good conversation relies on a balance of give-and-take. It is possible that you may have encountered some users who are not good at giving but are exceptionally good at taking – that is to say, taking away your energy that could have been better spent elsewhere.

It is also possible that you have made the mistake of taking up someone else’s time without really giving much in return.

One-word replies are one of the clearest signs of disinterest, even if you are actually interested – again, there is a disconnect between what you mean (or what you feel) and what you say when it comes to text messaging. 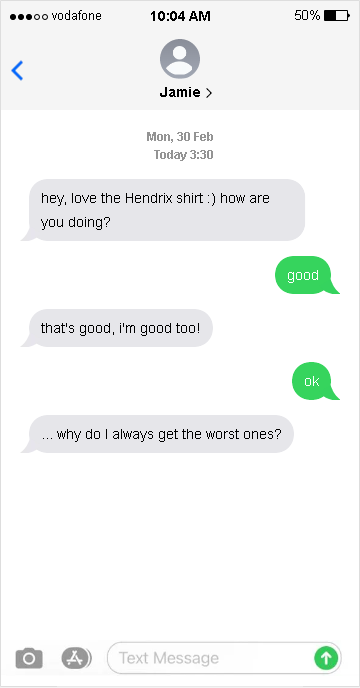 There are quicker ways to kill a conversation, but not many.

Even if the conversation thus far has not lent itself to comprehensive replies, do your best to engage the person on the other end. Ask them questions that do not have a yes-no answer, forcing them to engage with you.

Additionally, if you are guilty of sending too many one-word replies, try to catch yourself in the act and elaborate on what you mean in your messages. (Watch out that you do not overshare, however).

Why Are Your Chats Disappearing?

Sometimes, keeping a conversation going is not made difficult by a lack of social awareness, but rather by some annoying technical difficulties. If you have ever lost a chat with someone, there are a few possible explanations as to why.

The User May Have Blocked You

Unfortunately, sometimes people are not as interested as they may let on. This is one of the many challenges of online dating that almost everyone has faced before.

On CMB, if a user blocks you – or rather, unmatches with you – the chat disappears from your chat history. This could be due to a number of reasons (including any of the date-repellants we have previously mentioned), but it is most likely due to the fact that your match may have found someone else.

Unfortunately, there is not much you can do in this situation except finding someone else to chat with.

The User’s Account May Have Been Banned or Deleted

Coffee Meets Bagel is strict with its guidelines concerning harassment, offensive language, and other reprehensible behaviors. It is possible that you may have matched with someone who seemed great at first, but may have crossed the line with other users one too many times.

In this instance, if a profile is reported, they are given a warning, and subsequent reports against it may lead to the profile being banned or the associated account deleted entirely.

Again, there is not much you can do here except move on and find someone better to chat to.

The Chat May Have Expired

CMB gives you a limited timeframe within which to chat with a match (7 days, to be exact). That means that you really need to seize the day and strike while the iron is hot, establishing a connection quickly before asking them out.

Occasionally, however, the chat may expire before you get the chance to really get to know someone. When this happens, the chat is stored in your chat history, where you can reread it at your leisure and potentially reopen it if you have some beans to spare.

However, there is a chance that your expired chats will not show. In this case, it is likely due to the app caching it to make space for newer chats.

Luckily, you can recover the chat by going through the chat history on your Bagels page.

By now you should have a clear idea of what to do and what not to do to keep your matches engaged, and keep the replies rolling in.

If you think that you may need some help with your profile, feel free to make use of our profile writing services. Additionally, if you are still struggling with what to say, take a look at our text message feedback services.