Getting to know someone online has its limitations as well as freedoms. For example, you don’t have to dress up or spend on car gas or dinner menus only to come back home all grumpy. Instead, you may just take a deep breath, type a super composed text message, and hit send.

But wait, was that text enough? You didn’t come off as an overbearing, creepy stranger, right? Even though you triple-read the one-liner message before sending it, every moment that passes before the blue ticks is a nightmare. 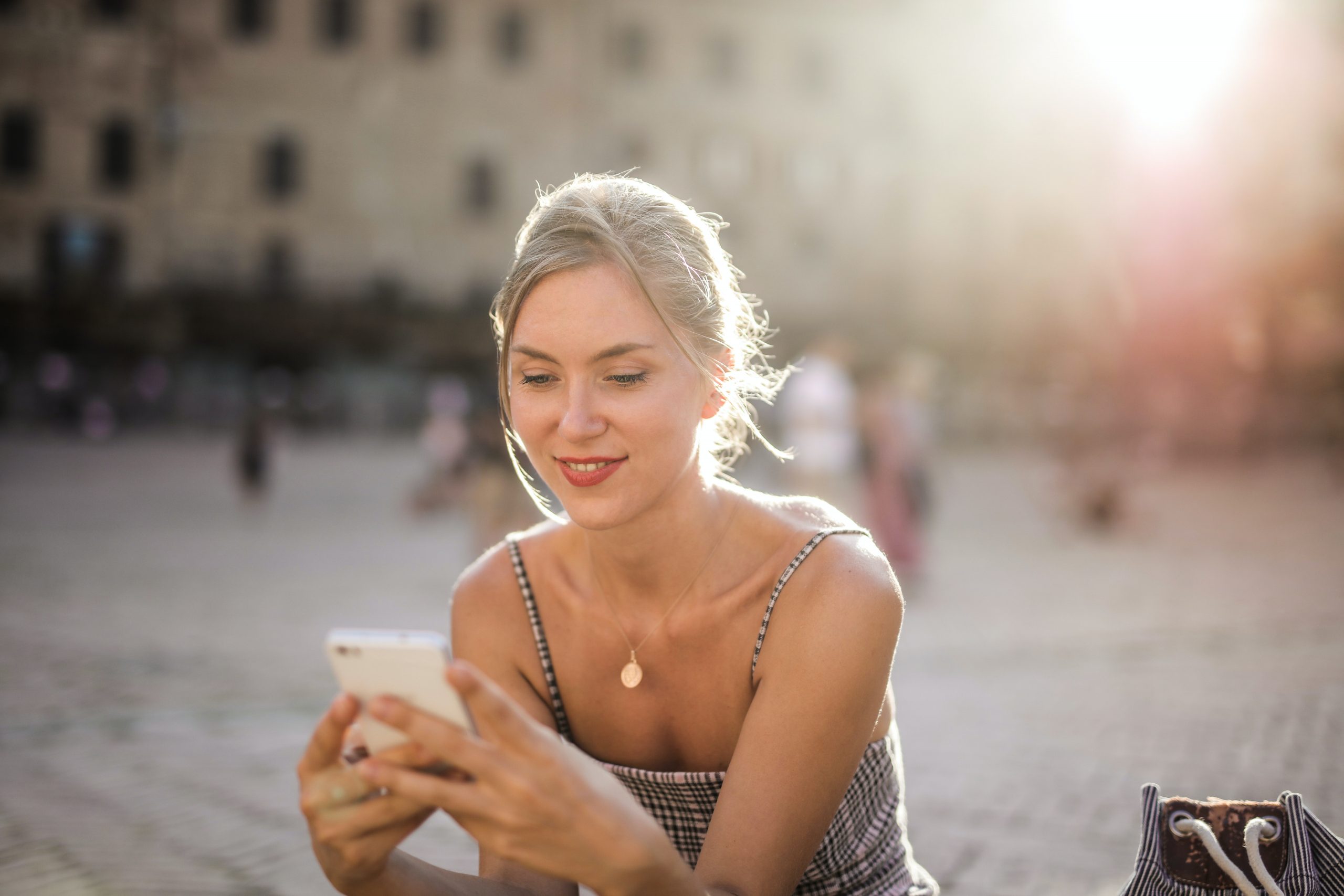 What to do next? Continue these PMs here? Or should you move the text messages with her to your dating profile DMs? How will you manage your icebreakers on different apps? Good Lord, texting and online dating had never been so hard when you were just looking for flings. But this girl right here is someone you really like, so you have to be way more cautious about where your Hinge conversation leads to.

What it Means if She Responds to Your Text Right Away

When she texts back fast, it means that she’s making you a priority. Even if the conversation is casual. Even if you two are having a disagreement. Even if she has a million other chores to do. If she tries to free herself to talk to you, then mark my words, she wants to make you feel important and finds you special even without any formal commitment!

As you can see from the conversation above, both people are engaged and asking each other questions.

Here’s how you can know if she’s interested through her texts:

When she texts back fast, it means that she’s making you a priority. Even if the conversation is casual. Even if you two are having a disagreement. Even if she has a million other chores to do. If she tries to free herself to talk to you, then mark my words, she wants to make you feel important and finds you special even without any formal commitment! The conversation below is a good example of what you should be aiming for: 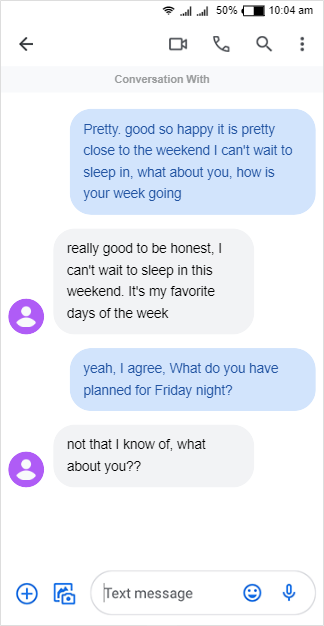 Is She Responding to Be Polite?

One-word, emoji-less replies indicate that she’s only being polite and formal, which are signs that she respects you but doesn’t want to take things forward either. This could also mean that she’s either struggling to find a way to end anything that’s going on between you both or that she’s confused about where this texting may lead to.

For instance, this example here shows us how she would reply if she’s really into you. If this dude wasn’t lucky, she would’ve just responded with ‘Haha’s and ‘IKR!!!’

She Teases You and Flirts With You

This one’s a big sign that she’s super into you! Most girls don’t easily open up with guys, especially online, especially through dating profiles (yes, even the well-written ones!). But if she really likes you, then she won’t hesitate to show you her witty and savage side. She’ll tease you about random things and won’t appear offended when you do the same with her.

Before I say anything further, I want you to know something. You should actually have a strong dating bio on all your socials and dating apps to take your conversation this far. If you want to keep your profile game top-notch, then I’d love to help!

I’m a dating profile ghostwriter with endless accounts of success stories from clients who were once just like you — butterflies in the stomach and chaos in the head. My text messaging and dating profile services can help you talk to your dream muse and get her swooning all over you in no time!

She Takes 10 Minutes to Respond

These days, most of us usually check our phones after at least ten minutes. If that sounds too short, then maybe half an hour or an hour in the rarest cases, or whichever time frame works best for you. In any case, a short and simple ‘Hey BRB in 20!’ doesn’t take more than a few seconds to type and send.

So, if she acknowledges your texts as soon as she gets the time to see them, then she’s making an effort to be there for you whenever possible. Sure, sometimes her fast replies are only to ask you to wait until she’s free. Still, at least she isn’t ghosting or ignoring you. She also makes up for her absence with a long, detailed text or a meme or one of her signature jokes about her monstrous boss as soon as she gets the time!

She’s Concerned When You Don’t Text Her

When she’s concerned about her relationship status with you, she’ll probably ask herself, ‘Why isn’t he texting me?’ or ‘Why does he take forever to text back?’

Occasionally, she may express her thoughts and even hint at her insecurities and fears when you take too long to text back. All of these are signs that she is investing her feelings, thoughts, efforts, and time in you, and she isn’t afraid to admit that, either!

Regardless, try not to drag her through too much. Self-respecting women don’t exactly like being lead on! If you really want to come across as a keeper, then you’ll have to show her the same enthusiasm as she has for you.

If she’s a girl of few words, then you can also keep your texts as short as hers. Short, but interesting! If she likes to flood your inbox with lengthy paragraphs, then you can try to send longer replies as well. If she uses lots of exclamation marks and emojis, then you can also try to pepper them into your text messages. If she’s a GIF-talker, then make sure your GIF game is just as strong!

(Pro tip: try texting them at the same pace as they do, or check out this guide for a more detailed vision of adult relationships and texting!)

If A Girl Always Responds to Your Texts, Here’s What You Should Do

You’re literally on cloud nine right now, and you don’t want to mess this up, right? Now carefully listen to what I’m about to tell you: if you’re not attentive enough, everything can come down crashing within minutes! Save yourself from that impending doom, and make sure you follow these tips to keep your conversations alive and productive!

If you only remain focused on talking through one social platform, she may mistake it for a lack of interest and commitment. Try to connect with her profiles on other apps like Tinder, OkCupid, and Bumble, as well as through social platforms such as Twitter, Instagram, Facebook, or Snapchat. If you don’t want to come off as a stalker, you can simply ask her for her usernames and see if she’s okay with it, before adding her and texting her anywhere else!

2. Respect and Appreciate Her

Respect her boundaries. Respect how much she allows you to be a part of her day. Respect her when she asks for some space (no, it isn’t always ghosting, it may be something else… I’ll just get to that point in a bit!). Appreciate it when she remembers small details about you and tries to make you the center of your conversation. This is the best way to develop trust and eventually forward in the relationship in a healthy manner.

The user below shows his appreciation that the girl made the first move. 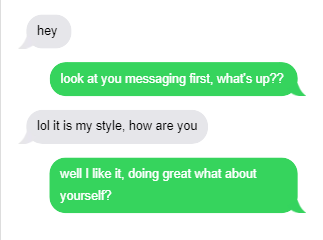 Want to floor her with these humorous-respectful replies after breaking the ice? I have some excellent ideas in mind!

3. If a girl stops replying to your text

If she stops replying or her texting game has changed, then you may naturally feel worried. However, it’s not the end of the world. Even if you and her do your best at this texting relationship, there’s still a chance that things may not work out. 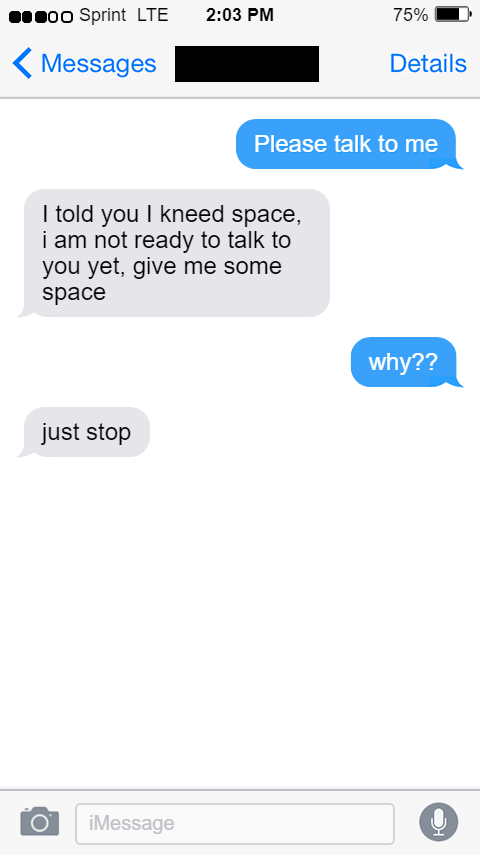 At this point, try to figure out and clear any misunderstandings between you two. This way, you’ll avoid having a list of soft-ghosting breakups, and you’ll also be able to reconnect and revive a dying conversation with your old Tinder matches sometime later!

In the online world, it can be quite hard to express one’s feelings and keep the conversation afloat. However, it’s the effort that matters, and the right girl will notice it straight away. If you’re stuck on how to proceed without making your texts sound dead and disinterested, I hope this guide helps you out.

If you’re serious about revamping your profile and taking your dating life to the next level, I can help. My professional dating profile services will give you a magnetic bio that gets you more clicks, replies, and dates.