One of the most common complaints that women have regarding romance is that the men they are interested in constantly send mixed messages about their relationship status. He seemed so into you at first, and now he goes through phases of ignoring you.

What happened? That’s what we’re going to discuss in this article. We’ll be taking a look at what you can do in this situation, as well as what it could potentially mean when a guy talks to you and then ignores you. Read on for more.

He Talks to Me Then Ignores Me

One thing that you should realize is that he’s not going to ignore you if he really likes you. Guys don’t enjoy playing hard to get, and even if they do, they generally aren’t very good at it (sorry, guys). Guys will never tease a girl then suddenly ignore her if he really likes her, so if you’re being ignored, it might just be because that guy isn’t interested anymore.

I say this all the time in my other posts, but you shouldn’t take this personally! People are fickle, and their feelings are going to change. The best thing to do is move on to bigger and better things. 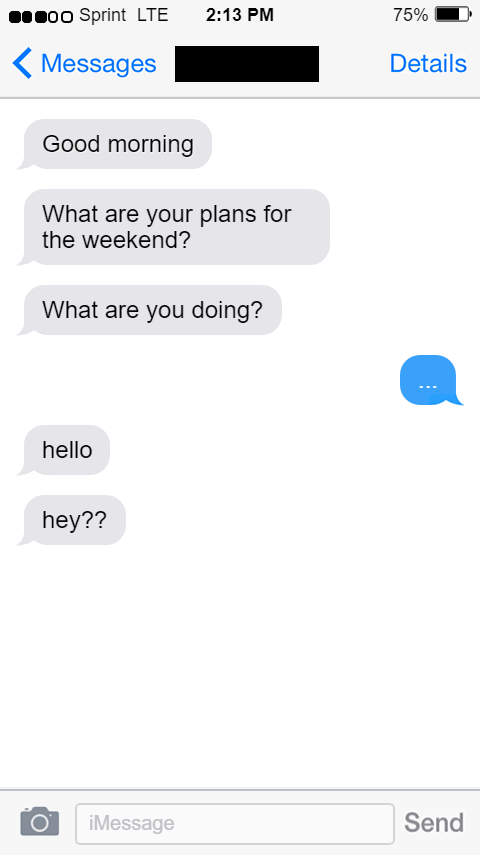 We all know that everyone is extremely busy these days. Because of this, someone taking time out of their day to reply to you is actually more meaningful than you might think because it means that they care about you enough to dedicate even a few minutes to respond to your texts.

If a guy actually cares, he’s going to put some effort into actually being in your life. That means he’s not going to leave you hanging on your texts but will rather text back because he wants to talk to you. The above image is a great example of this fact.

Texting someone back also doesn’t take more than a minute maximum. And for any guy interested in you, responding to your texts isn’t going to take him any effort. So to answer the question: no. If he really just were not interested in you, he wouldn’t even make the minuscule effort to send you a text back.

Here are some common reasons why someone won’t respond to your text.

He Takes Hours to Reply But is Online

This is another form of being ignored, though it’s definitely a little harsher. When you see that the guy you’re interested in is online and texting other people but is ignoring your texts, you have the right to be a little frustrated and confused.

However, there are a few potential reasons for this behavior. Let’s take a look at them.

He needs a digital inbox detox

In today’s digital media world, instant quick replies are expected. However, when you’re constantly doing a million things, the last thing that most of us want to do is reply to a bunch of text messages. Even if the guy really likes you, he may just need to take some alone time to himself and forget about answering anyone’s texts. That, unfortunately, includes you.

Every individual has a different capacity for the volume of communication they can handle in a day, and it’s possible that he may just need a short break before he responds to you.

He is figuring out how to reply

Have you ever liked someone so much you were worried you might send them a poor text message that will scare them away? If so, then you’re certainly not alone. A lot of guys feel this way when they like a girl.

Read the last messages that you sent him and assess whether your message is tame or requires a deeper response. If your last message to him was a deep question that required some thought or a detailed story, he might be figuring out how to respond.

He thinks you’ve ended the conversation

Both parties have to participate in the conversation if you want them to be engaging and long-lasting. If you previously sent something curt like “lol”, or “K,” he might have assumed that you just weren’t that interested in talking. If this is the case, it means you have to put more effort and thought into your conversations. You can’t just send one-word answers and expect a meaningful conversation. 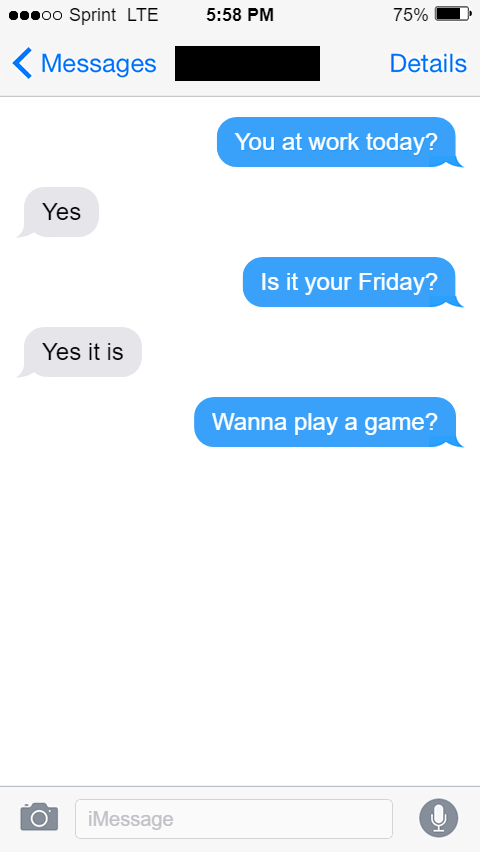 If your replies look similar to the gray bubbles, he probably thinks that you’re just not interested in talking to him, so he’s not going to reply!

You want to make sure that your texts convey the message that you want to continue the conversation. Ask him some questions, formulate thoughtful replies. If you feel like you’re having a dry conversation, change the subject.

Here is how to fix a dry conversation.

When a Guy Says “Sorry for the Late Reply”

When you haven’t received a reply from him for a while, and his name finally pops up with the words “Sorry for the late reply,” (or something along those lines), how do you respond?

It’s common for people to apologize for things that they aren’t really sorry for, but not so much when it comes to texting. When someone doesn’t care that they’ve kept you waiting for a reply for a day or two, they won’t apologize for it and will generally just carry on as if there had never been any radio silence. 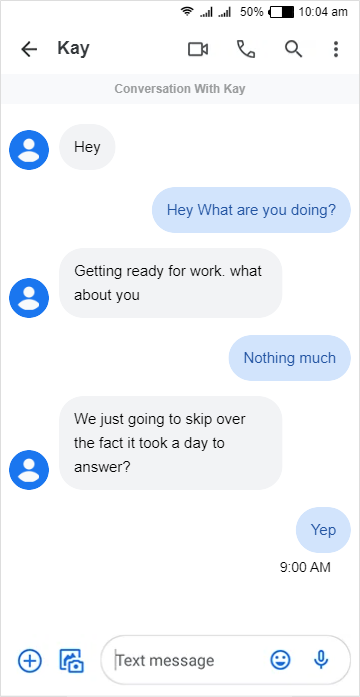 Take the above conversation, for example. The gray bubble really doesn’t care that they took over a day to respond to the other person’s text, so they didn’t apologize.

So, when that guy you’re interested in tells you that he’s sorry for keeping you waiting for a reply, he actually means it! And it’s up to you to respond in a way that makes his apology feel validated while also letting him know that you aren’t too happy about being kept waiting.

“I appreciate the apology”

This is a fantastic way to convey gratitude for the apology while still honoring the frustration that his late reply caused. This response captures the fact that you can see that the apology might have been difficult for him to make and that you want to show appreciation for their vulnerability.

Saying “it’s ok” or “I don’t mind” to an apology is generally a big no-no, but in some cases, it is valid. If you truly don’t care that he kept you waiting for a response for a while, then you can let him know through this apology. Just try not to suppress your own feelings only use this response if you really are unaffected by the wait.

“I hear you. Please put more effort into responding quicker.”

This reply lets him know that you’re taking the apology in while also conveying that you would appreciate it if he could be more punctual with his response times.

Ghosted for a Week

Nobody likes to be ghosted, whether it’s soft ghosting or just straight-up ghosting. If a guy hasn’t responded to your text in a week or more, there’s a good chance that he’s just not interested in talking to you.

This may be tough to hear, but it’s the truth. In these kinds of situations, the best thing for you to do is to try to put him out of your mind and move on. Eventually, you’re going to find someone who actually enjoys talking to you and who you won’t need to play games with!

However, don’t let that stop you from sending him a text asking about his radio silence. He might just genuinely have been busy or forgot to send you a reply (the latter of which is a minor red flag).

Here are 5 common reasons why guys stop responding on Tinder.

Relationships can be complicated, and getting mixed signals is a super frustrating experience. I hope that I could help you decode these signals and help you see what they really mean.

If you want to be able to create interesting text messages that will always get a response, whether you’re on a dating app or just texting back and forth with a crush, take a look at my text message feedback service! Or, if you want to be able to get more matches on your favorite dating apps, like Tinder, Hinge, or Bumble, my dating profile copywriting can help you do just that.