Picture this: you’re texting a guy and things seem to be going great. He’s funny, charming, the conversation flows well, and you have a good flirtatious rapport going back and forth. But then, over the course of a few days or weeks, he slowly stops texting you as much.

Instead of charming texts, you’re starting to get one-word answers, ‘chatspeak’ replies, and the dreaded “OK.” What gives? Let’s go over the texting habits that guys have and how to deal with them.

Why do guys text less after a while?

There’s a lot of reasons why a guy might just stop texting after a while. Some of those reasons might not have anything to do with you or the conversation! Take a look at the top three reasons that a guy might text less.

He’s more comfortable with you.

The longer you go on texting with someone new, the more comfortable you get. He might not feel the need to impress you as much now that you’ve both gotten to know each other a little more. This is a good thing! If you want to keep the flow of conversation going, try to ask a question, make a joke, or move the conversation onto something light and fun.

Let’s be fair here. Haven’t we all let conversations that we enjoy fall to the wayside when life gets busy? Sometimes, texting less (while still replying!) is a sign that he’s into you, but he’s just struggling to keep up with all the things going on in his life. In this case, why not try to set up a meeting for you to hang out, or even just a video call? Sometimes talking face to face is much easier than remembering to reply to a text.

He’s just not that into you.

I know we all dread this answer, but the truth of the matter is: sometimes a guy stops texting because he’s just not that into you. If you’ve ruled out the other options, this one might be it. For guys, sometimes slowly stopping their replies is easier for them than having a hard conversation. You can always get feedback on your text conversations here to find out if he’s just not that into you. 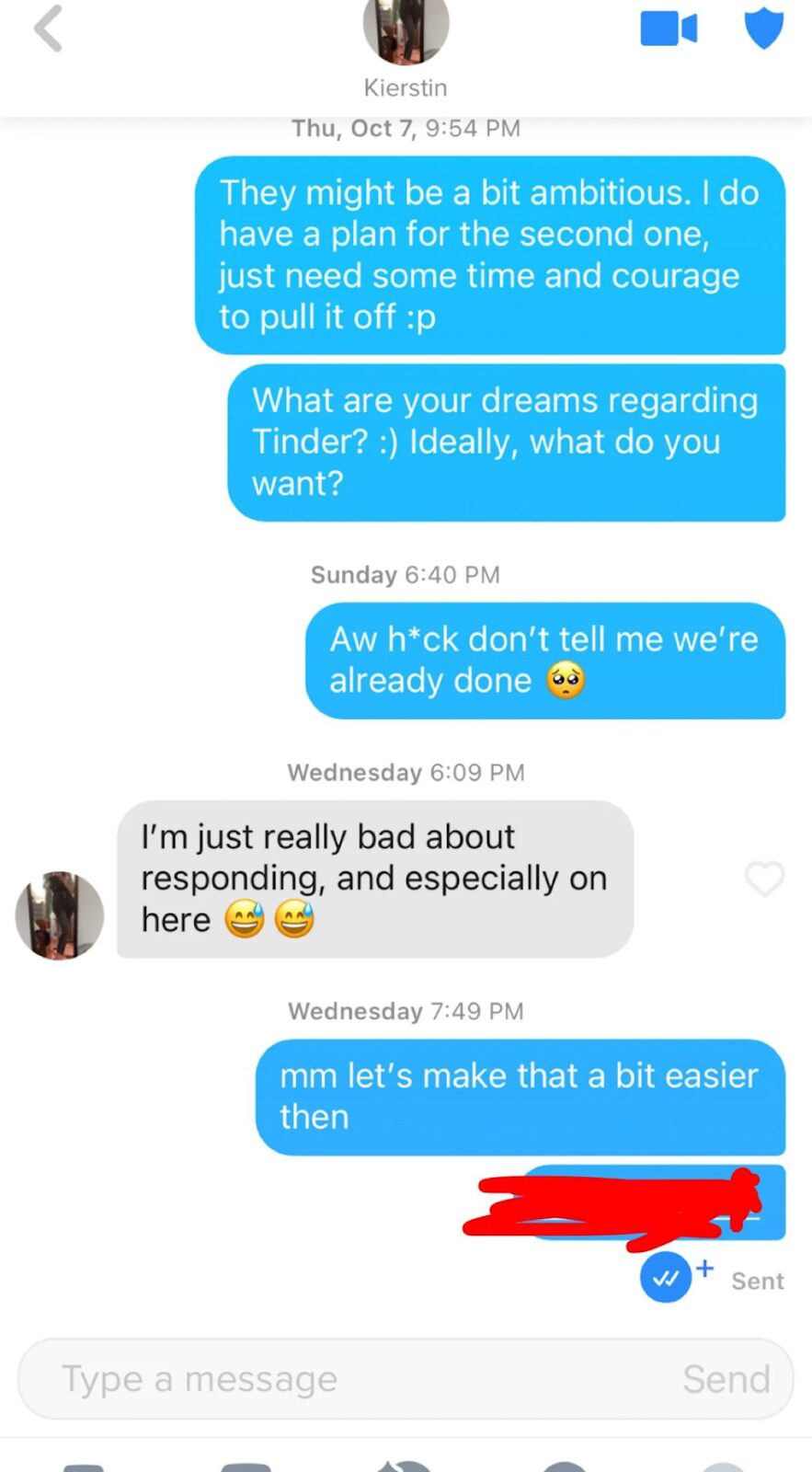 As you can see, multiple messages over the course of a few days go unanswered, and the guy above gives the excuse that he’s “really bad at responding”. If a guy is into you, he’ll make the effort! Don’t try to force something that’s just not going to happen.

He is distant but says nothing is wrong

We’ve all been in this situation: texting a guy who seems distant, but when you press him for more information, he says there’s nothing wrong. Guys are a lot more likely to try to handle any of life’s stressors on their own, rather than involve someone else. What should you do when it seems like he’s distant but insists that there’s nothing wrong?

Step one: just try to relax! You’re not a mind reader, and all you can do is trust what he says when he says there’s nothing wrong. Maybe he’s stressed about work or money, or maybe he’s just trying to come to terms with how he feels about you and your conversations. Whatever the reason, nothing good will come from a freakout. So try to stay calm!

Be there for him

If he’s distant but still texting you, then he definitely wants to keep the line of communication open. Guys don’t tend to keep texting people that they’re not into. The next step is to show up for him when he needs it. When he texts you, he’s looking for that connection, so make sure you’re there for him, especially if you think the connection that you have is special.

“I enjoy talking with you, you always make my day better.”

“I’m always around if you need to vent or just to talk.”

One of the best things you can do when you’re talking to a guy who says nothing is wrong is just be direct and ask him what’s going on in his life. Try to phrase the questions to learn more about what he’s going through. How is his day? How is work going? Is he getting enough sleep? These questions will lead to a more honest answer and may get to the bottom of why he’s being so distant. 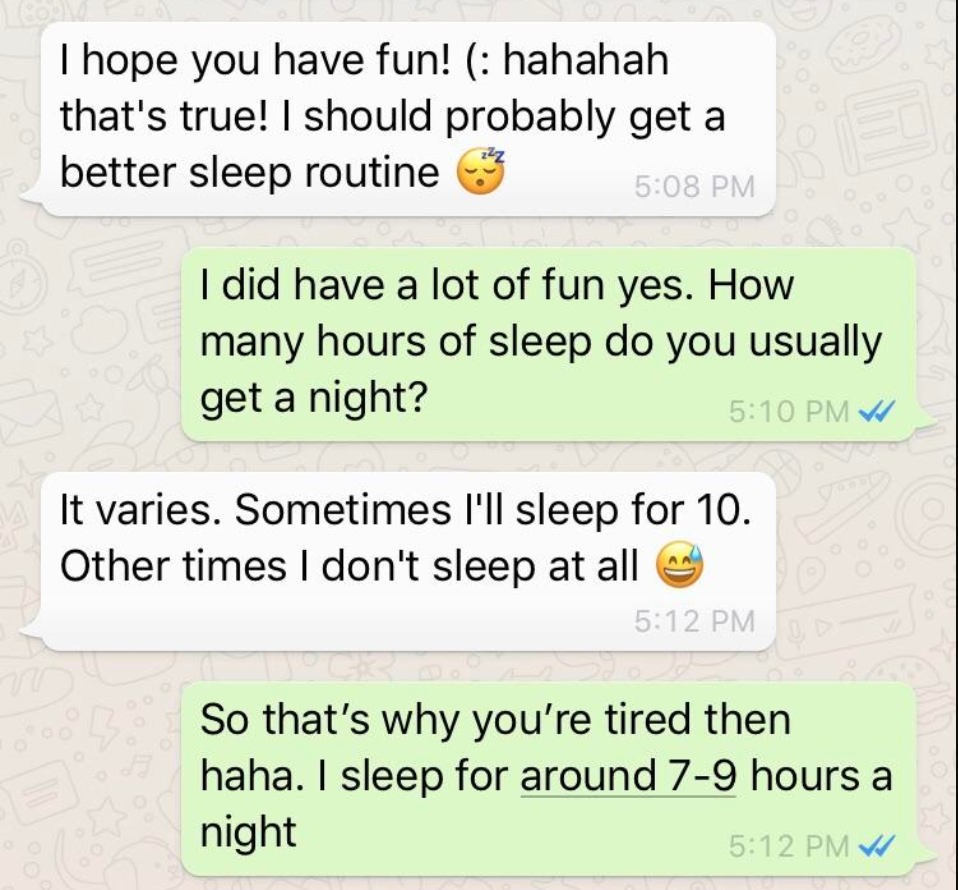 As you can see here, instead of pushing for “what’s wrong”, there’s a question phrased where one person can learn more about how the other is feeling and what they’re going through.

He apologized for being distant 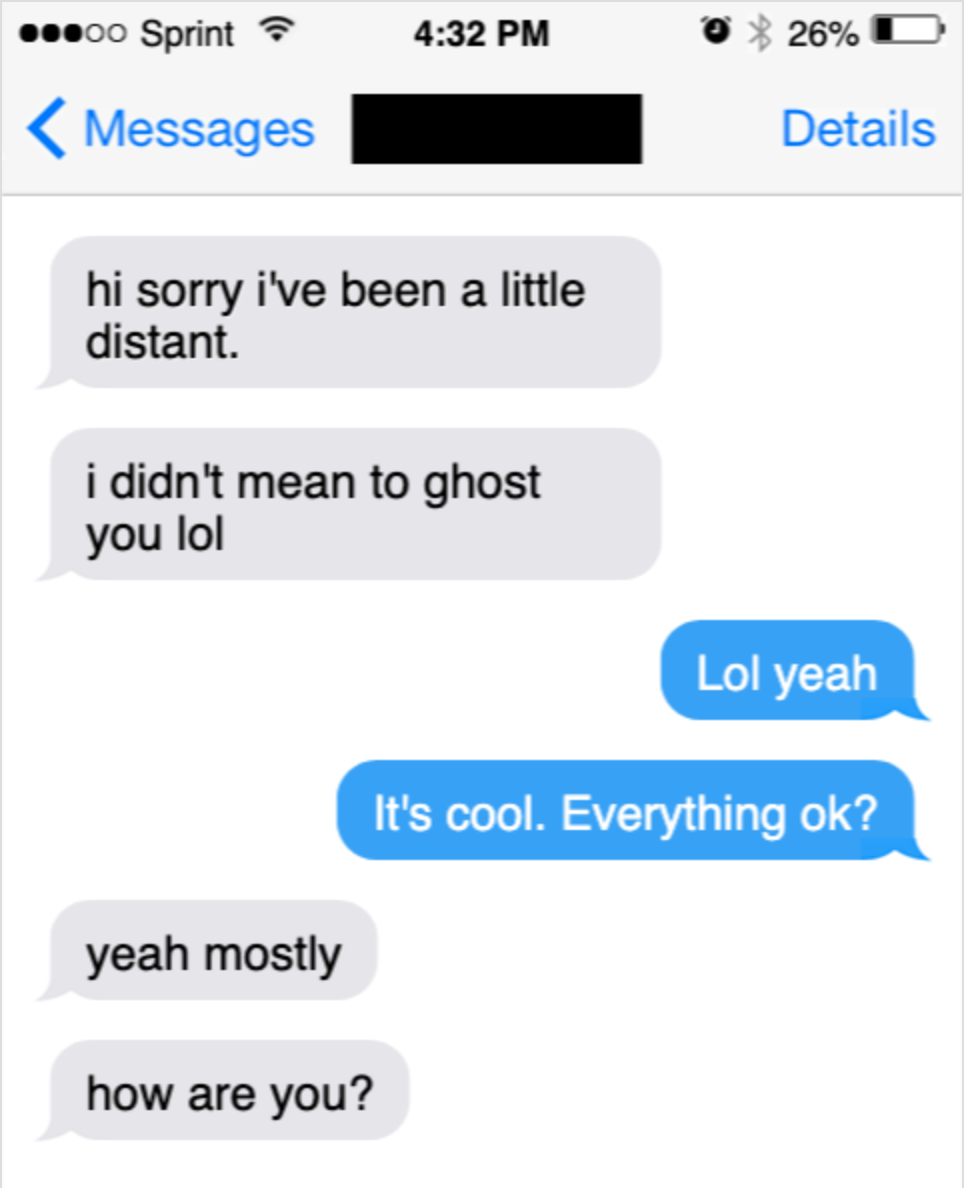 Here’s a great example of a guy who apologized for being distant, but showed that he’s still interested. He’s acknowledged that he’s been distant, but is still reaching out for that connection.

Don’t try to make it seem like you need all of his attention at once. Give him a little bit of space to orient himself. Be there for him when he needs someone to talk to, but don’t try to overload him with attention. This shows that you’re listening, but respect his boundaries.

For example, feel free to text him good morning, and ask how his day is going sometime in the afternoon. You can also text him in the evening to see how work went. These little reminders let him know you’re thinking of him without overwhelming him with a bunch of texts throughout the day.

He texts me first but gives short answers.

Nothing is quite as annoying as short answers, especially when you feel like you’re really vibing with a guy. If he’s texting first, then chances are he’s still into you. But what gives with the short answers, and how can you entice him into sending longer texts?

As you can see, this person started off with a good icebreaker and then moved on to asking the other person questions about themselves. Urging them to talk more about something seen in their profile is a great way to get the conversation rolling.

On the other hand… this conversation doesn’t seem to be going anywhere. These one word responses mean that it’s almost impossible to have an actual, fulfilling conversation.

Learn what to say after you’ve broken the ice.

Ask him about his interests.

Everyone likes to talk about themselves, just a little. If you find the conversation is getting a little stale, try asking him about the things he really enjoys. It should loosen him up and he should give more detailed replies. Now he knows you’re interested in the things he likes, and you’ve got an opening for more conversation topics.

Or, if they’re not much of a sports guy: “What’s the most binge-worthy TV show, in your opinion?”

If you’re looking to get a general idea of what a guy likes, you can go with the classic line: “What kind of stuff do you do for fun?”

Some great friendly debate topics could include:

“Which is the best superpower to have and why?”

“Is it better to be rich with no friends or poor with a lot of friends?”

“Are aliens and ghosts real?”

You can ease into your friendly debate by starting off with: “Hey, I have a weird / random question for you…”

When a guy says he will let you know when he is free.

Getting past the texting stage is always exciting. But sometimes, just trying to meet up in person can be a difficult task in and of itself. When you’re in the middle of trying to set up a meetup and a guy says that he’ll let you know when he’s free, it could mean two things.

He really will let you know when he’s free.

If it’s been more than a week and you still haven’t gotten a time to meet up, give him a few options out of your schedule. This way, you can start a conversation around when a good time to hang out would be, without pressuring him to make a choice. If he still seems hesitant to pick a time, it might be best to move on.

He’s trying to let you down easy.

The less fun option is, of course, that he’s simply trying to get out of meeting up because he’s just not that into you. If you’ve spent weeks trying to set up a time to meet and he’s still “not free”, then maybe it’s time to swipe right on someone else. Maybe it’s time to stop texting.

What does it mean when a guy says “We’ll see”?

For the most part, guys are pretty straightforward! If a guy likes you and he likes where the conversation is going, then he’s going to want to get to know you more. And that includes meeting up on a date. Getting off Tinder, Bumble, or Hinge and into the real world is the next step in the talking stage.

So, what gives when a guy says “we’ll see”? Well, you might not like the answer: he’s probably not that into you.

If you’re really interested in him, try giving him a few options and times to meet up. It might get the ball rolling if you make the first move instead of waiting. Suggest some activities that you think he might be into. If he’s into you, he’ll make it work!

If a guy wants to get to know you more, it won’t feel like you’re pulling teeth to get him to meet up! If a guy is blowing you off that many times with cryptic responses, it’s time to move on. As a profile ghostwriter, I can help. Get more matches and dates with people who are actually interested in you.