There’s probably nothing more disheartening than being ghosted. That guy you were talking to suddenly just stopped texting you and ceased all contact, and the worst part is that you may never know why.

Was it because of your personality? Did he just not have the courage to tell you he wasn’t interested anymore? These are just a few of the questions that are probably racing through your mind, but one that might stick out is: will he contact me again?

In this article, we’re going to find that out.

As a general rule, you should not expect that guy to text you back after he’s ghosted you. It sounds harsh, but it’ll save you a lot of anger and frustration that you’d experience by waiting in vain for that message to come through. Do your best to move on with your life – it’s cliche, but there are so many more fish in the sea!

Redownload Tinder or Hinge, go out and meet people again, go clubbing with your friends. There’s so much more you could be doing than staying hung up over some guy. 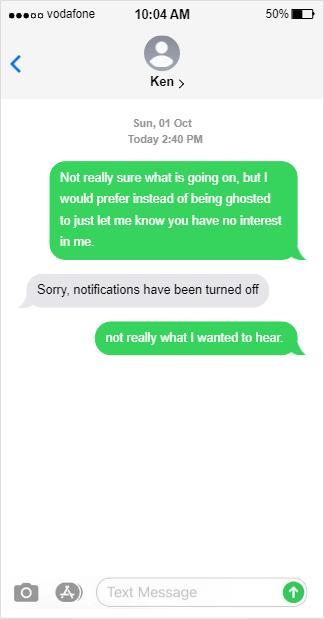 The green bubble in the above conversation handled being ghosted fairly well. They were calm and collected and didn’t attack the other person.

Why Would a Guy Text You After Not Texting for 6 Months?

One of the more confusing behaviors that men tend to exhibit is their sudden disappearance, then randomly texting you again. While this is definitely more of a rare occurrence, it still happens, and usually happens the exact moment you’ve moved on to bigger and better things.

There are a few reasons why this might happen. Let’s take a look at them.

He just wants a quick hookup

There’s a good chance that he’s just in the mood and wants a quick hookup. You’re an easier target here because you two have already been together and he probably knows that you might still be just a little hung upon him.

If he’s bored and is just looking to get lucky, you’re a potential possibility. He’ll probably try to tease you, so do your best not to fall for this trap!

He needs someone to boost his ego

If your breakup was a one-sided one – in that he broke up with you but you wanted to stay together – it can feel good for him to reach out to you and get a reminder that at least one person cares for him. This is generally more of a subconscious motivation and is most certainly not flattering for you, but it’s more common than what you might think. 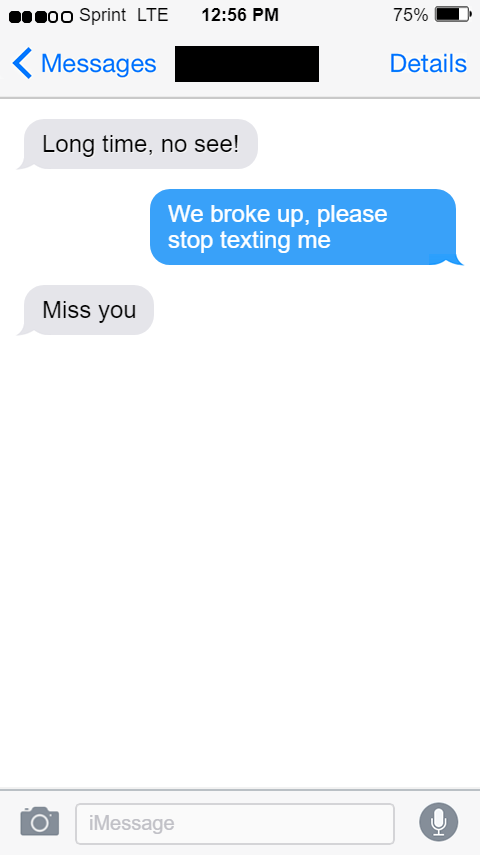 He might try to start up the conversation with you because he is lonely but it’s important to remain steadfast and to remember why you broke up in the first place.

Sometimes he genuinely just misses you and the times that you spent together. This might not be the most common reason for a guy to randomly text you again, but it’s definitely a possibility and one that you shouldn’t rule out immediately.

How to Respond to a Text After a Long Time

Staying in touch with people can be quite a challenge, but texting them is an excellent way of re-establishing contact. However, if it’s been some time since you last spoke to someone, especially if they were a romantic interest at one point, you might feel awkward about soft ghosting them, or you might be scared of being rejected.

Here are some ways that you can respond to that text you haven’t opened in months.

Acknowledge that it’s been a while

One of the best conversation starters in this situation would be to preface your greeting with a statement acknowledging that it’s been a long time. If you don’t have a good explanation or excuse as to your radio silence, you can be more general with this preface. 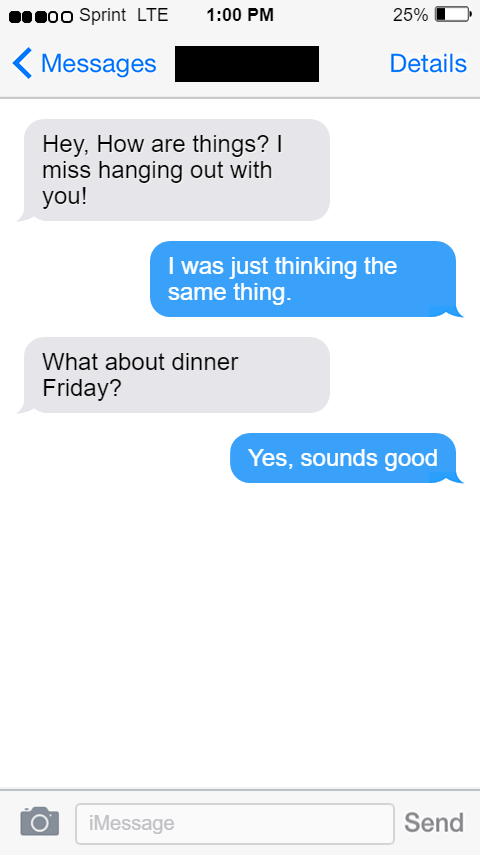 The above exchange is a perfect example of casually starting a conversation with someone again. The gray bubble acknowledges that it’s been a while and also that they’ve been thinking about the blue bubble (a topic I’ll get to shortly). It’s a quick, friendly way to let someone know that you haven’t forgotten about them and that you want to reconnect again.

Give an explanation for your silence

If you find that you simply never replied to the last message somebody sent you, or that you haven’t been great at staying in touch, try to provide that person with an explanation for your absence. It’s not uncommon or unreasonable for people to take it personally when they don’t get a response from someone, so explaining why you’ve been away can help relieve their hurt feelings and repair any damage you may have caused.

Let them know that you’ve thought about them

If you’re reaching out after a while, chances are you’ve thought about them, so let them know! Most people will greatly appreciate hearing that you’ve been thinking of them, so this is an excellent way to brighten their day while also re-establishing contact.

When a Guy Starts Texting You Again

If you’ve just received a random text from a guy you haven’t spoken to in a long time, you’re probably confused about what you should say and how you should relate to him. Here are some tips for this situation:

Know where he stands

When a guy messages you out of the blue, you have to know the current state of your relationship with him. Who is he to you now? A friend? Or just an acquaintance? The answers to these questions will determine the way that you talk to him. 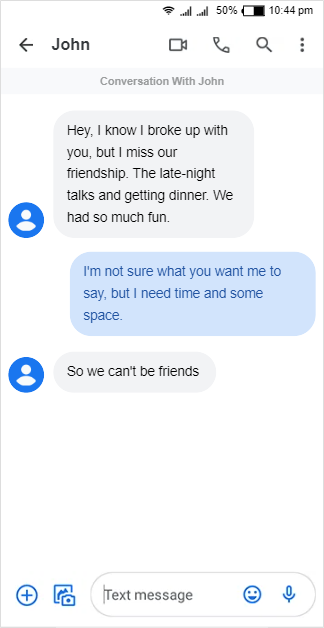 You have to try not to fall for guilt-tripping tactics like those depicted above. The gray bubble is trying very hard to provoke more of a reaction from the blue bubble. You need to be the blue bubble here! Steadfast, headstrong, and sure about yourself, all you’ll fall right into his trap.

Don’t get ahead of yourself

If an ex-boyfriend or crush texts you after a long period of radio silence, and you two ended things on a bad note, it’s easy to think that things will never be how they were, even before you’ve let things play out. If he got away from you, you might still want to rekindle what you had.

While you definitely need to know what you want from your future, try not to get your hopes up about getting back with him. You might just disappoint yourself if you do.

He Hasn’t Texted Me for a Month

If a guy hasn’t texted you in a month, the most probable reason is that he’s not that interested. Even if you haven’t fully been ghosted, the long stretches between texts are never a good sign.

When this happens, you’d be better off just not thinking about him or texting him anymore. If you know what’s good for you, you’ll chalk this one up as another one that didn’t work. And, as I’ve already mentioned, this is not the end of the world. There’s so much more waiting for you out there, and getting hung up about one man is only going to inhibit you. 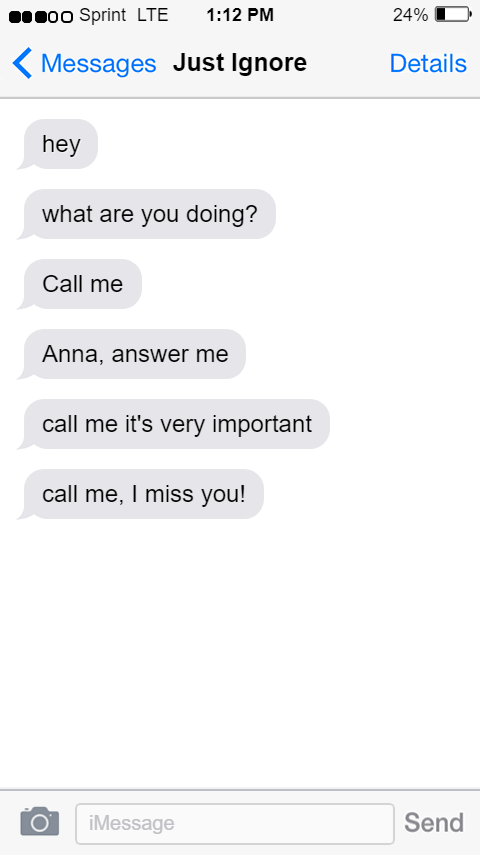 You don’t want to be the gray bubble in this situation. It makes you look desperate, and you’re better than that! If you’re sending him messages like this and just aren’t getting a response, it’s time for you to move on to bigger and better things.

Texting etiquette can be confusing sometimes, and I know that there’s nothing worse than getting ghosted. Just remember that there’s probably a reason for him reaching out so suddenly again, and while you might immediately expect that he’s up to no good, you should still give him a chance.

If you’re looking to create texts that always elicit a response, whether you’re on a dating app or just texting back and forth with a crush, be sure to check out my text message feedback service! Or, if you’re trying to get more matches on dating apps like Tinder, Hinge, or Bumble, I’m here to help with my dating profile copywriting.