Getting an “Aww” text can make you question where you stand. Does it mean that she thinks you’re cute, or that she just wants to be friends?

My clients often ask me how to respond when a girl texts them, “Aww.” So, I created this guide to help you understand what it means, and how to respond. 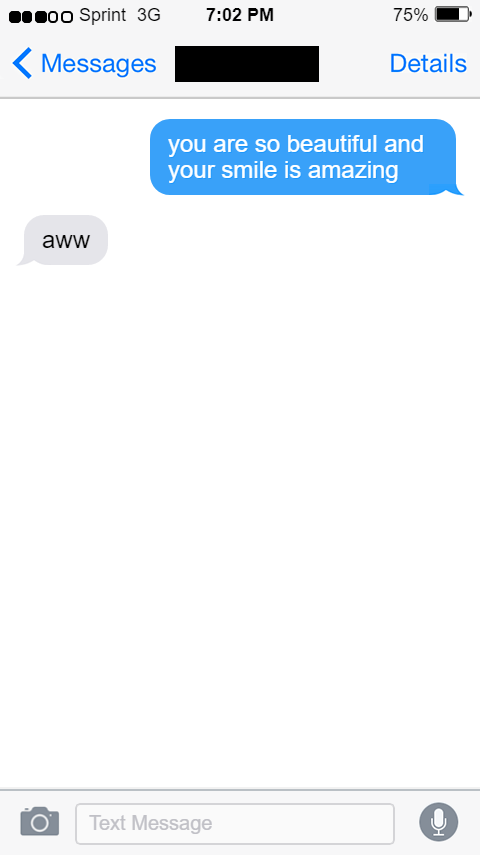 How to Respond to “Aww” From a Girl

When responding to “Aww” from a girl, the best idea is to change the conversation topic with a question or joke. Usually, when a girl texts, “Aww,” she isn’t sure what to say, so your reply should quickly move on so you can get the conversation flowing again.

For example, ask her a question about her day or something random, like “Have you ever been to Europe? I’m watching a TV show set in England right now and it’s making me want to go!”

You can also go with a joke or story about your day. Try to stay away from boring knock-knock jokes, as these won’t give her very much to work with and she’ll probably end up responding with “Haha.” Instead, you can flirt by telling a funny story from your life that can act as a conversation prompt. 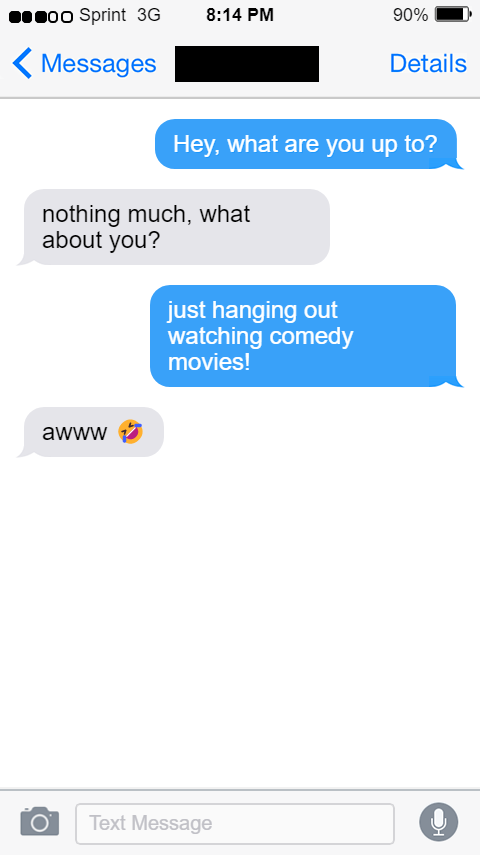 Take a look at the conversation above. She responded “Awwwwww,” with an emoji, but he wasn’t giving her a compliment. The best move for him is to change the conversation topic so they can connect about something else, like what movies she likes.

How to Respond to “Aww Thanks”

Flirting with someone by giving them a compliment is a casual way to express how you feel about them. But when they follow up with something short or awkward like, “Aww, thanks,” it makes you feel rejected and question whether or not you should have said anything.

The good news is, there are a few possible responses to “Aww, thanks” that can bring the conversation back from the brink of death. Take a look back at the compliment you gave your match. Was it about their personality, or their looks? Often, people are uncomfortable accepting compliments, especially about their outer beauty.

If you gave a compliment about their looks and they responded, “Aww, thanks,” the best thing to do is move on and change the conversation topic. You can do that in a few different ways, like: 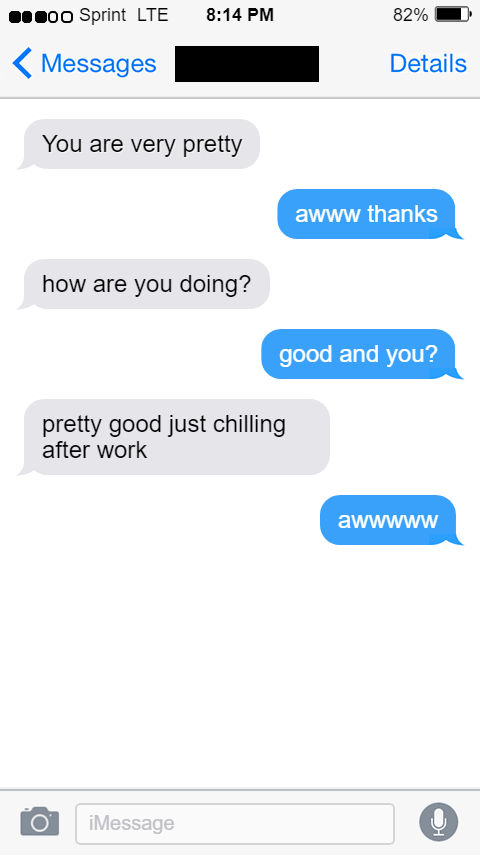 In the conversation above, instead of just telling her he was “chilling after work,” he should have asked her a question so she would have something more to respond to.

The same goes for if you complimented their personality and they responded, “Aww, thanks.” You can choose to explain your compliment and ask a question, or just shift the conversation. It could look like:

The Best Reply for “Aww”

The best reply to “Aww” makes the conversation move forward, because a one-word response like that can actually put a break in your messaging. If you leave it at that or drive home the reply, you run the risk of turning it into a dry conversation.

Instead, go for something that reminds them how exciting you can be otherwise. Change the topic of conversation by bringing up something interesting from your life or hers. For example: 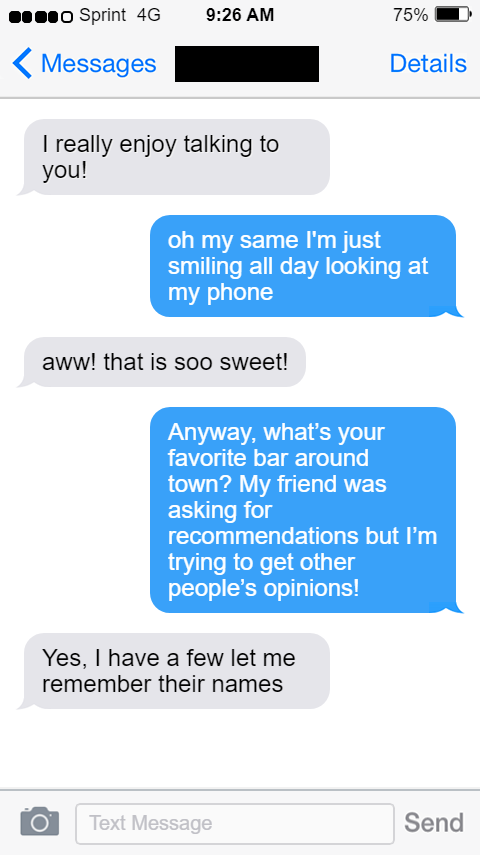 Another option is to keep things flirty and complimentary. This girl in this conversation responded with “Aww! That is so sweet!” showing that she’s interested in him. If you get an excited response like that, you don’t have to think of a witty response. You can reply with something flirty and kind or talk about something else like he did.

It can sometimes sting when you get an “Aww” back from someone you like. Though they might not mean it, “Aww” makes it seem like they feel bad for you, and instead of ghosting, they just send boring responses.

In many situations, that’s not the case – but for some people, an “Aww” is what they say when they don’t want to say anything else and lead you on. If you’re feeling stung by a one-word, “Aww” text message, you can go with a witty response that shows them you have a sense of humor and have more to offer. Try a text like:

What you don’t want to do is double down, like the person in this conversation: 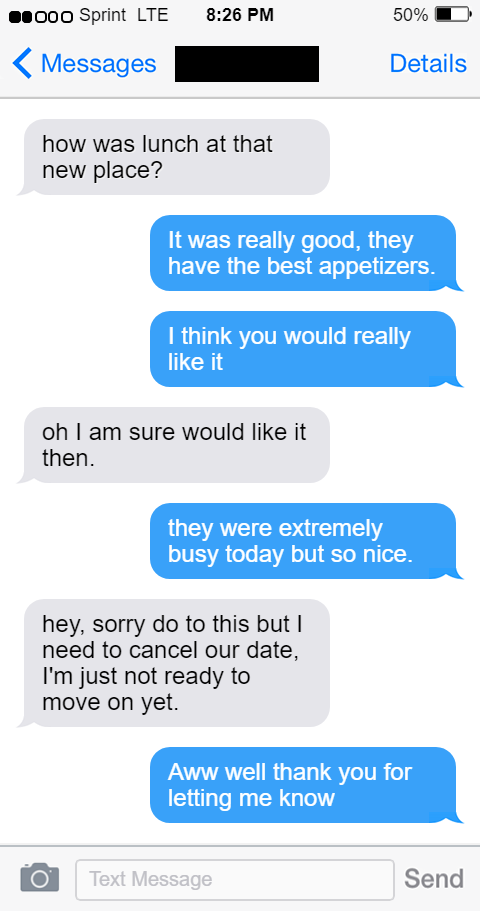 She responded with “Aww well thank you for letting me know” but no other questions or thoughts. By continuing to talk about the same subject, he may have bored. As a result, she may have lost interest which led her to cancel the date.

While he sent a very kind response to the rejection, he may have had more luck by switching the conversation topic or saying something witty right after she sent that first response. Now, he’ll just have to go back to Tinder, Bumble, or another online dating site and try to find a new match.

Learn how to craft the most successful online profile with my personalized dating services.

How to Respond to “Aww You’re So Sweet”

“Aww, you’re so sweet” can mean two completely different things, depending on your relationship to the person who says it. If it’s coming from a girl who isn’t interested in you, it can mean she feels bad and doesn’t know what else to say. But, if it comes from someone who wants a relationship, they could be paying you a compliment back.

Whether or not “Aww, you’re so sweet,” comes from someone who is flirting with you, it’s important to respond with something charming. In that response, you can either say thank you and move on or tell her why you said it. For example,

Or, to explain why you said it, something like, “I like to tell people how I feel about them, and I really do feel that way about you!” 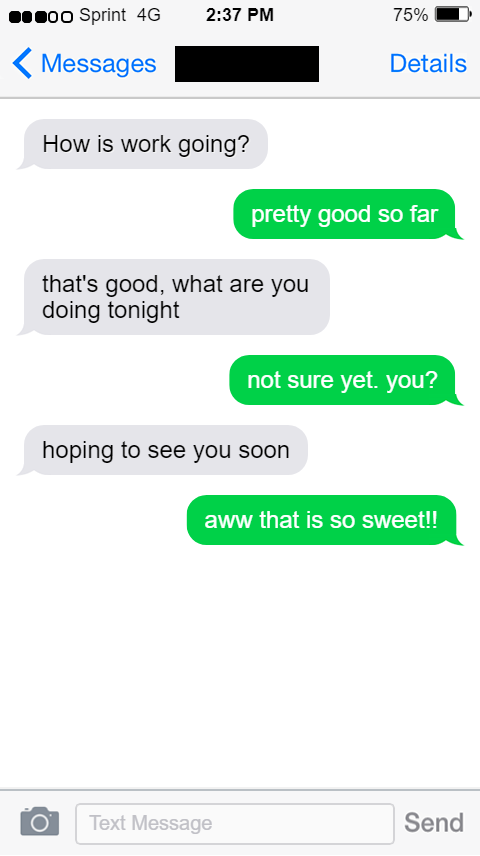 The person in the conversation said that he is hoping to see her soon which led to a positive response.

Funny Response to “You’re So Sweet”

When someone says, “You’re so sweet,” it can be somewhat demeaning. Though it’s often meant as a nice statement, it doesn’t always come across that way. Because of that, the best way to respond is with a funny, witty reply. Here are some options:

If you find yourself wondering how to respond in conversations, you’re not alone. But instead of struggling through these sorts of questions by yourself, I can help lead you through the confusing waters of online dating.

With my personalized dating profile ghostwriting, you can get more matches, dates, and replies. And, I offer services to help you seal the deal and make the best connection with your perfect match.