Since your first ever conversation with her, you’ve been waiting for her to make her first move in attempting to talk to you. You’re usually the one to text first, whether it’s for a genuine reason or just for casual chitchat. However, you’ve now had a lucky breakthrough; she just said she’s going to text you!

At this point, you may feel like a balloon floating in the big blue sky. Looks like you finally mean something to her! But hold on. Why does she want to text you? 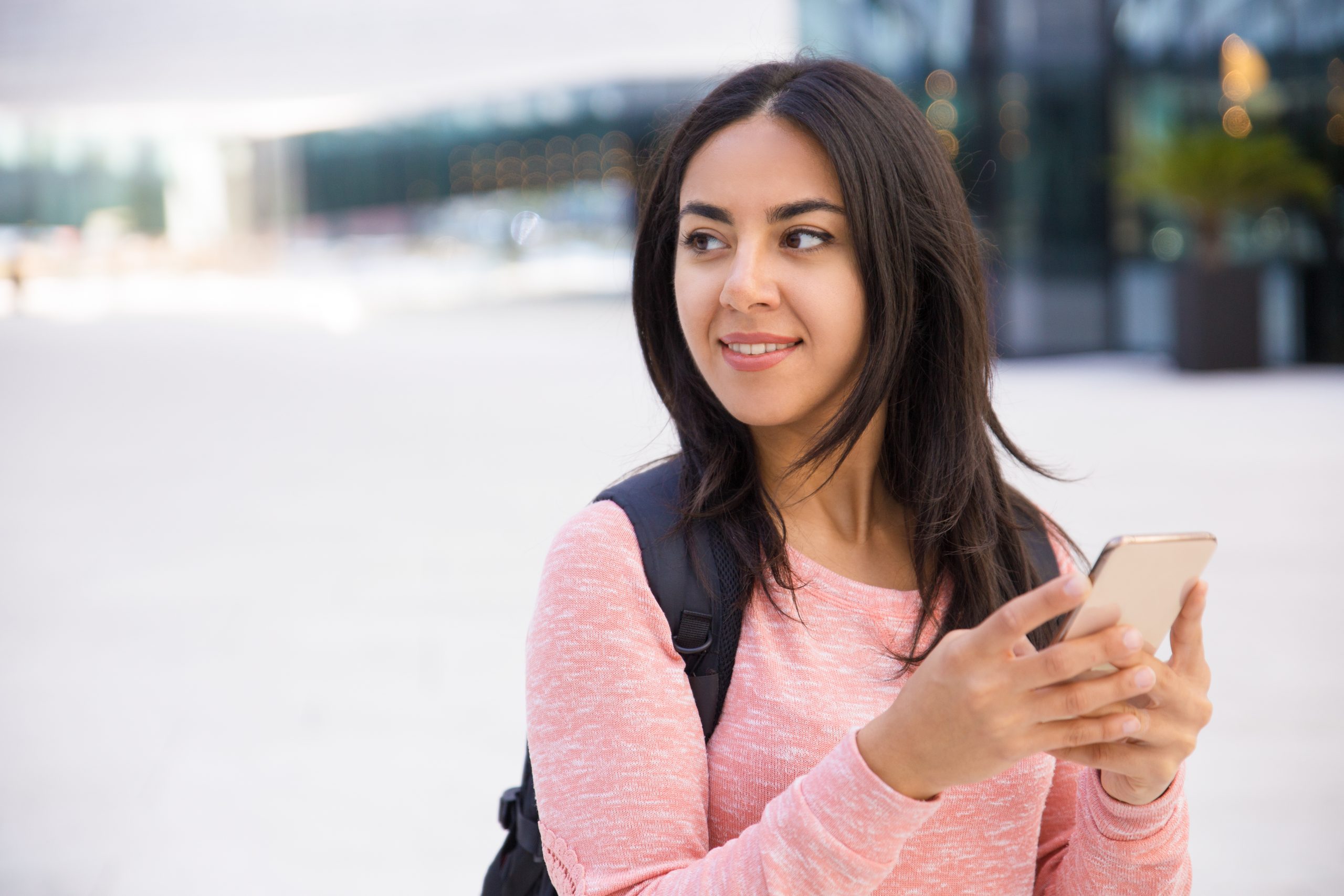 What Does It Mean When She Says She’ll Text You

To be quite honest, it could mean almost anything. She doesn’t need to have the same reason for messaging you as you think she does. Here’s a stepwise breakdown of determining what she’s implying when she says she wants to have a little conversation with you:

How She Tells You

Does she casually mention that she will use one of her conversation starters on you when you’re with other friends or colleagues? Or does she ask to send you the heads-up through someone, perhaps in order to build more suspense? Or maybe she actually approached you without any previous interaction and told you that she was going to text you.

Context is the biggest game-changer here. It can turn the tables in literally an instant, so you have to be informed about the context before you assume anything. For example, if you have asked her out, maybe she wants to either friendzone you or talk to you about how she’s not okay with you flirting, or maybe wants to add you on all your dating profiles, such as CMB, Hinge, Bumble, Tinder, and OkCupid!

If you two have already been discussing another issue, or if you two also have any other formal and informal relationship, then perhaps her conversation starters about something that’s not so private and special.

So yes, context does matter. However, if you want your dating bio to ultimately set off the fireworks between you two, just drop a word in my inbox. I’ve worked with many others like you to help them get their dream girl to text them. That too constantly, with lots of flirting. So although she may consider rejection for you right now, you can always sign up for my services as a dating messages consultant to stay away from getting friendzoned!

Now, let’s have a look at this person’s cleverness. Although the girl texted first and seemed like a casual text, he’s trying to steer the conversation into a more interesting phase. The point here is, it’s great if she texts you first. But if you want her to feel confident about texting first the next time as well, make sure you make her feel welcome at her first attempt!

When and Where She Plans to Text

A fourth, and a pretty useful category. If she tells you the time and medium of the text, that can tell you a lot about her intentions. For instance, a text in the afternoon over WhatsApp might be related to work or any other non-romantic relationship. A text in the evening through Facebook might mean she’s just looking to chat for no real reason — maybe not even to remotely tease you!

A text on one of your dating profiles, on the other hand, that too at night, is a totally different thing. Perhaps she’s in for a serious talk about how she wants to take forward your relationship with her! If you’re not convinced, then just get in touch with me right here. I can revamp your dating bio and turn it into a date magnet for all sorts of potential partners, which will automatically attract her to you!

What Should I Do If She Hasn’t Texted Me All Day?

Big deal. It’s okay for her to not get back to you even after she said she would text you. Why? Because as adults, it’s easy for things to slip out if your mind, even if you’ve strongly committed it to your memory. There are a thousand other matters to tend to, which may have kept her from texting you all day. However, if you’re still worried about why she hasn’t said anything, here’s what you can do:

Last seen and activity information is a valuable asset on messaging apps. You can check her last seen and her activity status on different apps to know when and where she’s been active, whether she actually has ignored your icebreakers, or if she’s just too busy to open the apps at all!

See, this last seen information on WhatsApp and other social media apps comes in handy when you’re figuring out where a person is active. If she hasn’t been active in a long time, such as this user whose last seen was in 2016, then you may check out her last seen on another app!

Even something as simple as ‘Good afternoon’ will do the job. She’ll know you’ve noticed her absence (or the fact that she’s ignoring you). If she’s genuinely busy, she may also send a quick reply, appreciating that you’re looking out for her. This one here, however, is a total heart-winner. Checking up on her while also flattering her. Bravo!

I’ve had people come and tell me ‘she hasn’t texted me in 4 days, which is really something to worry about. Compared to that, 24-hour radio silence isn’t something serious. Even though you may want to confront her, or she herself may feel guilty, just try to brush it aside. Even if you’re sure she was deliberately ignoring you, try to keep things cool and smooth. This way, both of you will learn how to handle and develop personal communication techniques! 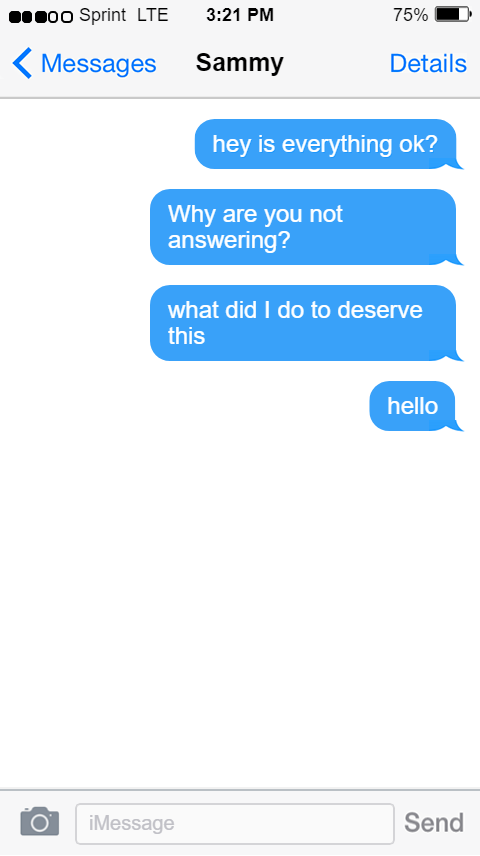 If She Texts Late, Should I Ignore Her for a Day?

I’d generally advise against that. It’s not wise for you to jump on the same bandwagon as her. If she has ignored you for a long time, then you also do the same. That may really push your relationships towards a dry conversation. And dry texting, fellas, is the first step towards getting completely ghosted or rejected by her! 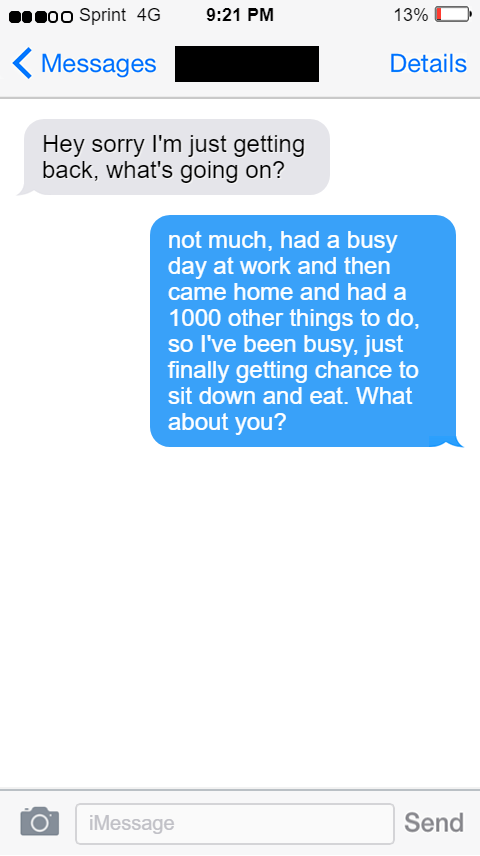 But that also doesn’t mean you should reply within a minute of her text. Not only is that a desperate texting etiquette, but that also indicates that you’re ready to tolerate any behavior from her. If you really want to show that you’re upset, you may try soft ghosting her for a few hours. If she tries her cheesiest conversation starters to avoid a dying conversation, then you can slowly start replying to her!

The conversation above is a clear case of no-go desperation. Would’ve been better if the replies came slowly, gradually, and definitely not in full paragraphs!

Want to know if you’ve been making similar mistakes? I’ll help you find out if you just click here!

Girl Gone Quiet on Me — Should I Do Something?

Well, can you think of something that made her upset? Anything you did? Perhaps an inappropriate remark? If you know what’s bothering her, then you could try sending her a text on Tinder to get her back on track. However, if you can’t think of anything that may have gone wrong, then it’s best to stay put for a day or two at least — maybe she just needs a break!

But What to Do When Your Crush Goes Silent?

If your crush knows you’re crushing on them, they’ll usually feel a bit reserved around you. It may also be that they have something else on their mind, or they’re just too busy to talk at the moment.

Although it’s natural to want your crush to talk like they normally would, it’s actually better if you stand by and let them do it their own way. You can send a few texts every once in a while as a goodwill gesture, and I hope that they’ll come around eventually!

As exciting it is for a girl to text you first, you still need to factor in a number of considerations — what texting etiquette you should follow, how you should take the conversation forward, how you should deal with dry texts, and so on. Luckily, you can find the answer to all these queries right here on my website! Plus, if you need help writing your dating profile, I can help you with that as well. Chat soon.