Perhaps the two of you had a romantic relationship that didn’t work out, or she was direct and ended it. Maybe she left you hanging, either by outright ghosting you or slowly fading away until the two of you no longer spoke.

Whatever the case may be, you’re here because you haven’t spoken to a girl you used to talk to in a long time, and you want to know how you can rekindle your relationship. You’ve come to the right place for that.

We’re going to help you send that text and get the conversation flowing again.

How to Text a Girl After a Long Time

If the two of you haven’t spoken in a long time, you shouldn’t expect a response right away. You’ll have to find the courage to press the send button, and then some more courage to accept the fact that you might not get a text back at all. Regardless, it’s important to stay optimistic about it – the worst that can happen is you two simply don’t talk anymore. If that happens, you can move on with your life and learn from the experience.

Here is how to revive conversations with old Tinder matches.

Starting a Conversation When You Haven’t Texted in a While

Starting a conversation with a person that you haven’t spoken to in a while can be super stressful, especially if the two of you were once romantically involved. There might be some unresolved tension between the two of you, or you may have simply drifted apart and not spoken since. 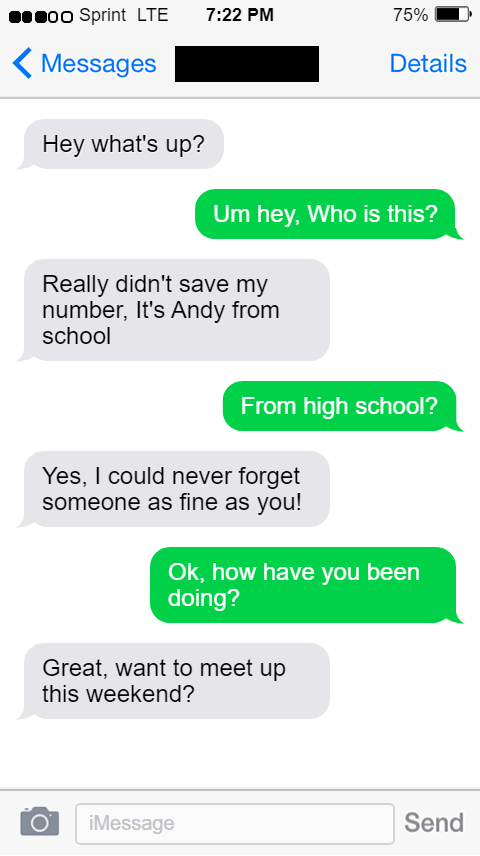 Take a look at the conversation above. The person in green clearly has no idea who the person is and is not interested in talking to them. If the responses you’re getting from that girl seem at all similar to those green bubbles, then she just might not be interested in reconnecting with you. If that’s the case, don’t stress! Instead, avoid pestering her like the gray bubbles on top, and instead reconcile with the fact that a rekindling might not be in your stars.

Whatever the case may be, finding the courage to send that text can be difficult. What if you don’t get a response? What if she does respond, but she’s super upset and confrontational? There are so many factors at play, and certainly too many for you to stress over. So don’t. Just hit that send button and hope for the best.

In the meantime, here are some things you should think about.

Why haven’t you spoken in a while?

If you haven’t seen or talked to a girl in a while, you are going to have to be honest with yourself and think about why that may be.

Start with thinking about why you two lost contact. If your relationship simply fell apart, life got in the way, or you’re just looking to rekindle something good, then you are probably in a good place to text that girl from your past.

However, if you were ghosted, if she blocked you, or if she broke up with you, then you should reconsider connecting at all. There is a good chance that she might not want to see your text from out of the blue. What’s more, if you ended on a bad note, think about why you would even want to text her in the first place.

If it’s been a long time since you last spoke to her, you are probably not on her mind as much as you’d like, if at all. It could be that absence makes the heart grow fonder, but the reality is that it’s most likely she has moved on and just doesn’t think about you anymore.

That’s fine. You can still text her, and you can still find a way to make her interested in talking to you again. This can be done by coming across as someone who is worth reconnecting with, but that’s not really something you can force. There has to be natural chemistry and charisma there.

Here is what to text a girl if you haven’t talked in a week.

Give her a reason to text back

One of the dangers of trying to reconnect with a girl you haven’t spoken to in a while is that she thinks you’re being creepy. You might think that this is unfair, but look at it from her perspective: she hasn’t heard from you in a while, and all of a sudden you’re coming back into her life.

As a woman, she probably gets hit on by random people all the time, most of whom are just looking for a quick hookup. So she’s automatically going to put her guard up when she gets a text from you.

How to DM a Girl You Haven’t Talked To

You’re scrolling through Hinge, Bumble, Tinder, OkCupid, CMB, and boom! You match with a girl. Great! You’ve already got a connection here: you liked her profile, and she liked yours, and now you just need to get to talking to her.

But how exactly do you do that?

The exchange below is a great example of starting a conversation with someone who you’ve only just matched with. The gray bubble is direct without being brazen, asking to hang out in a straightforward way that still gives the other person a chance to make up their mind about whether they want to go out with the blue bubble. Opening with a compliment is also a good game plan! 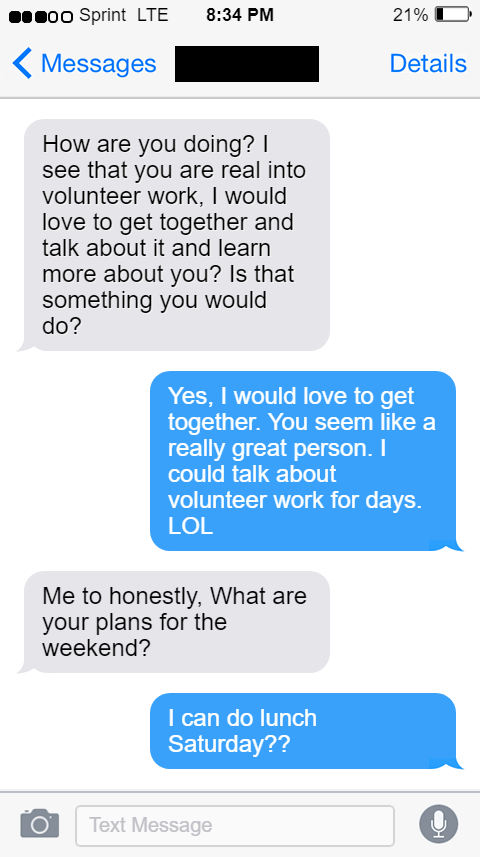 Starting a conversation on a dating app can be very challenging. You might not know what to say, and you definitely don’t want to come across as creepy, so what do you do? Well, the short answer is to just be yourself. If she finds you charming, excellent. If you face rejection, that sucks, but it’s not the end of the world.

Consider some of these icebreakers for starting a conversation:

The most important thing to remember is that you really don’t have to be nervous. If a girl decides that she doesn’t want to talk to you, there’s nothing you can do about it, and the best thing for you to do would be to move on. There are plenty of fish in the sea, and you’ll find someone who genuinely enjoys your conversations!

Here are some effective openers you can use for matches.

Should I Text a Girl After a Year?

Like I’ve mentioned a few times before, you have to think about whether or not you texting that girl after a long time would be appropriate. There are many factors that may have contributed to the two of you ceasing conversation, and you need to take all of them into consideration.

If you ended on a relatively good note with no arguments or bad blood, then sure, go ahead. You might just find that she’s been thinking about you just as much as you’ve been thinking about her. However, if you were ghosted, you were having dry conversations, or you were friendzoned, you should reconsider your reasons for talking to her.

Rekindling your relationship with that girl may not be the best course of action, especially if she’s already rejected you. Flirting with her right out of the gate also isn’t the best idea, and can actually be very off-putting

What Does it Mean When a Girl Texts You After a Long Time?

There are a lot of answers to this question, and almost none of them are clear-cut or definitive. That girl may have texted you out of the blue after a while because she needs reassurance to know that you don’t hate her, or maybe she just needs you to feed her ego. 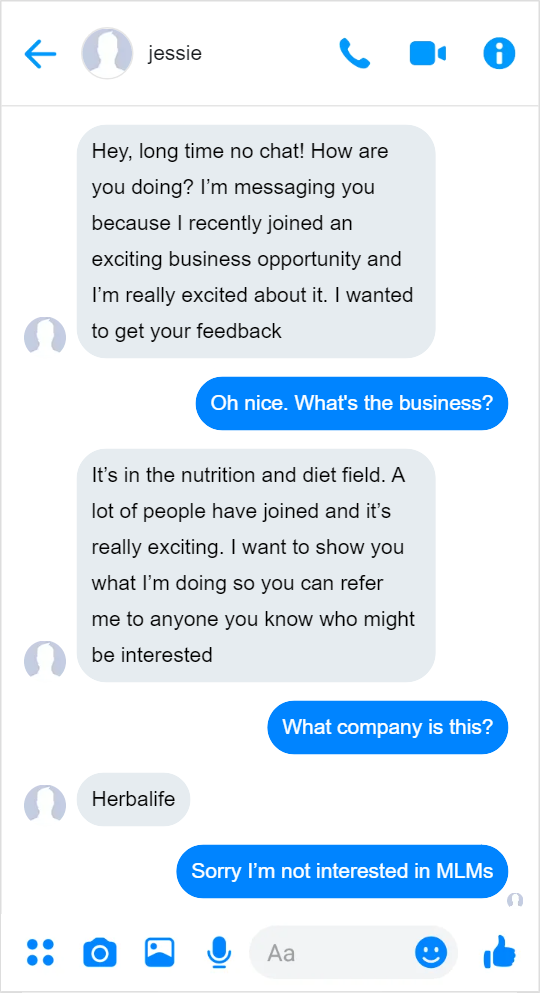 In the above conversation, the gray bubble has reached out after a while of radio silence to update the blue bubble on her life. There’s a big discrepancy in the length of the messages being exchanged, and you might find that a girl simply starts sending you paragraph-long updates about her life because she wants someone to reassure her and vent to. Even worse, they are trying to get them to join an MLM, which is one of the easiest ways to repel people.

Perhaps she’s just being nosey and wants to know what you’re up to, or maybe she’s just responding because you keep the channel open and she knows that she’ll always be able to text you. You’ll need to figure out the reasons for her texting you, and the best way to do that is simply to ask her.

If there’s one piece of advice I want to leave you with, it’s this: be fearless. The worst that can happen when sending someone a text after a long time is that they don’t respond. If that happens, you can move on with your life! There are so many more opportunities out there for you, and that girl might just not be the one for you.

If you want to get more matches and dates, I’m here to help. As a dating profile ghostwriter, I can help you create a profile that is attractive and that gets you replies. I’ll even help you craft perfect texts that elicit responses every time.