Online dating presents many challenges, primarily down to a lack of proper communication. Signals get mixed, and sometimes what is said is not necessarily meant.

Occasionally, however, someone will – seemingly – deliberately try to throw you off or otherwise avoid your advances. They may offer an excuse for why they cannot speak or why they cannot go out. In this post, we will look at the primary excuse people use to get out of a conversation and how you can deal with it.

What should you do when a guy says he’s too busy to text?

When a guy tells you that he is “too busy” to have a conversation with you, it could mean one of three things: he simply does not want to talk; he has found someone else, or he is too busy to reply to you.

Once you discern which hidden meaning applies to you, you can develop a suitable response. Your main goal should be to remain calm and unaffected, and you will need to show him that you are worth his time.

What does it mean when a guy says he’s too busy to text? 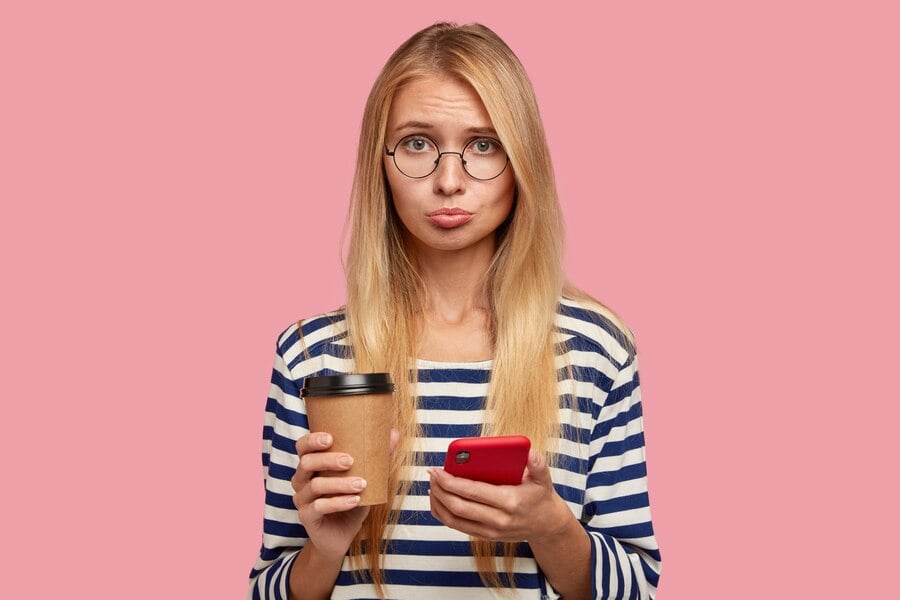 When a guy tells you that he is too busy to text, it could mean one of three things. This section will examine each of these meanings and show you how to discern one from the other based on your previous interactions.

This is the most common meaning behind the words “I’m too busy.” Especially in the early stages of a relationship, guys tend to be somewhat aloof and distant. Naturally, they will eventually open up, but they can be tough shells to crack.

Still, despite your efforts, you may find the results disappointing. Online daters tend to be fickle, and if you do or say something that they do not like, they will be quick to move on.

If you are unsure whether or not a guy is genuinely interested, look at your chat history. Examine both his responses and yours. Are his replies short? Does he seem disinterested in general? If so, it could be that you said or did something to upset him. 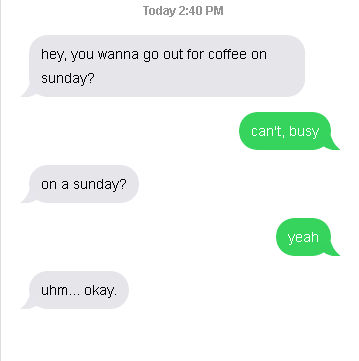 Of course, if his replies have always been short and dismissive, he was probably never very interested in the first place.

Unfortunately, there is not much you can do. Guys tend to have exceptionally short attention spans and will quickly move on from one person to another. Cut yourself some slack, and do not put in any more effort than you receive.

It Means He Has Found Someone Else

As mentioned, during the early stages of a relationship – online or not – guys tend to come off as distant in an attempt to save face. Unfortunately, during these early stages, some guys will “keep their options open,” so to speak. They will be hesitant to connect emotionally for fear of missing out on other relationships.

Online dating is problematic because it requires people to move quickly and think on their feet. The ones who do not tend to be left by the wayside – those who do reap the rewards. For example, when you and a guy first start talking, you should be quick to set up a date or exchange numbers as quickly as possible. If you do not, someone else may swoop in and succeed where you failed.

It is this specific scenario that we are referring to when we say that he has found someone else. Generally, the best way to determine this is by looking at the beginning of your conversations, the first three days in particular. If he seemed enthusiastic before but is distant and unreachable now, it is likely that he has met someone else and is only saying that he is busy to let you down gently. 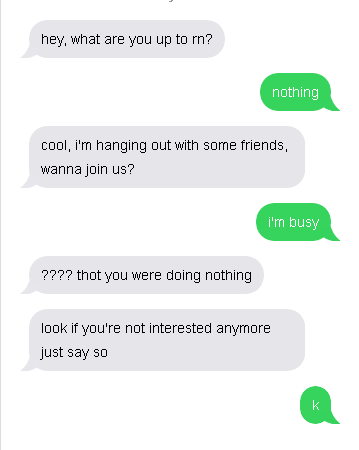 Again, in this case, there is not much you can do. It would help if you did not try to break up his new relationship. However, you can still be friendly. Let him know that it is okay if he cannot speak, then move on. Someone else will eventually find you.

It Means He Really Is Busy

Finally, we come to what should be the most obvious and common explanation. We all know that daily life can get in the way of what we genuinely enjoy sometimes. The guy you have been speaking to maybe, in fact, be eager to talk to you – he just cannot at the moment.

Look at your chat once more, and examine his replies. If they remain consistently upbeat and enthusiastic, he probably does not want to lose you. You should also keep in mind his schedule; if he is a student with upcoming exams, it stands to reason that he will not be able to text you back.  Likewise, if he has a hectic job. In this case, you can keep him engaged in various ways, which we will cover shortly.

How should you reply when he says that he’s busy? 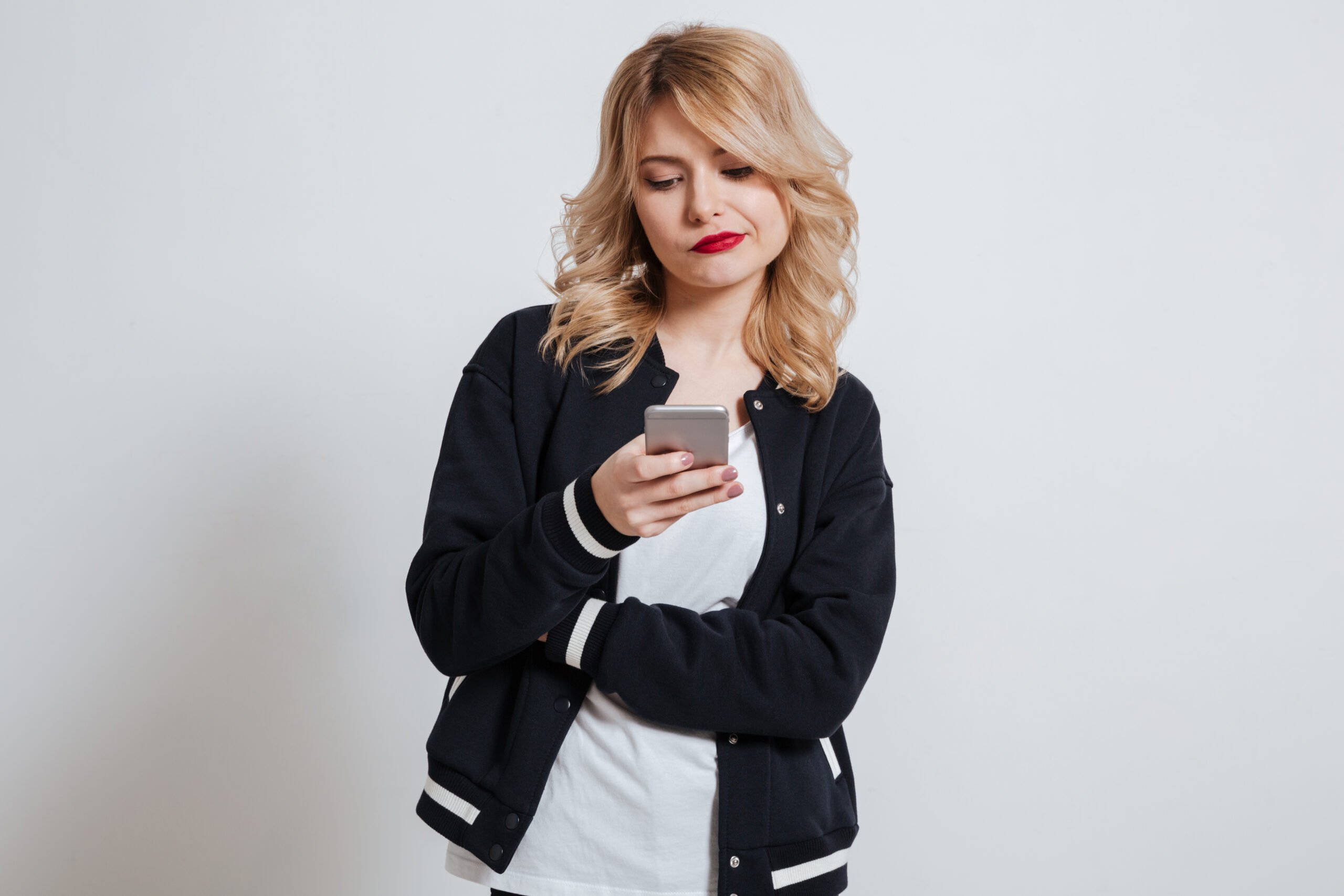 Although the “I’m busy” excuse can be a considerable conversation killer, there are a couple of things you can do to maintain a guy’s attention, even if he says that he is busy.

For starters, you should never double-text him. Double-texting is when you send another text in addition to the one you already sent, in an attempt to coax a reply. This, too, can be a conversation killer and only serves to further distance him from you. Instead, simply let him know that everything is alright and that you two can talk later, whenever he is ready.

The main goal here is to maintain a guy’s attention without annoying him. You should not bend over backward trying to do all of the work – there comes a time when “I’m busy” just will not cut it as an excuse anymore. 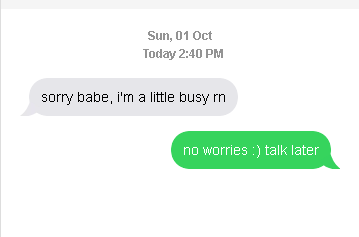 However, seeing as this is still early days, you can send him a funny text or two or give him some encouragement if he needs it. Alternatively, if you are feeling more risque, you could send him a sexy picture as well – that will get his attention.

Additionally, do not be afraid to invite him out to places you were already planning on going to. That way, if he does not make it, it will not affect you as much. It will also show him that you lead an exciting life, regardless of his presence.

What should you do if he says that he’s too busy to hang out? 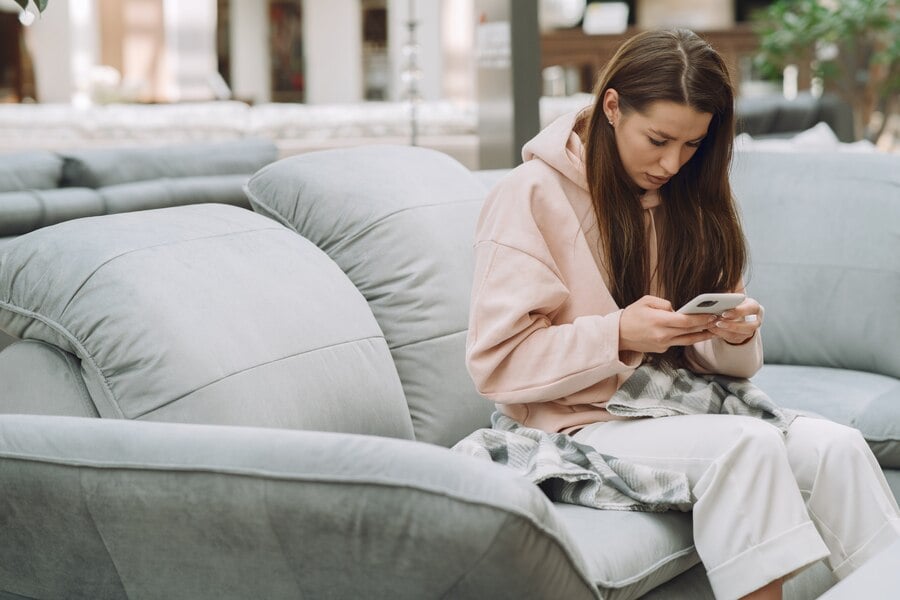 Going on dates can be fun, but it is also highly time-consuming, so you need to be selective with who you choose to spend your time with. If a guy says that he is too busy to go out with you, there are a handful of things you can try to determine whether or not he is truly worth your time.

Firstly, if a guy is as good as he seems, he will most likely reschedule with you. This is a clear indication of his interest in you. Of course, most guys will be too thick to think that far ahead.

In that case, it is up to you to organize the next date. Think of some fun activities for the two of you to enjoy together, and try to avoid the movies or going out to dinner unless you are already well into the relationship. 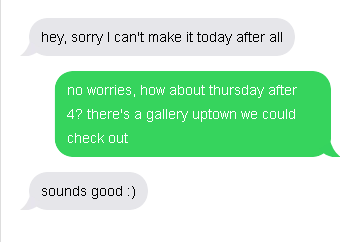 It will also help if you get to know his schedule in advance. This will allow you to pick a date and time that will suit you both – it will also let you know if he is lying about how busy he really is.

Of course, you should not be too pushy. Suggest another date and time, by all means, but if he comes up with another excuse as to why he cannot make it, you would better spend your energy on someone else.

What should you do if a guy says that he’s too busy for a relationship?

Guys who are too busy for a relationship are generally only interested in one thing: sex. Of course, there is nothing wrong with purely physical relationships, so long as both of the people involved know what they are getting into.

If a guy tells you that he is too busy for a relationship, he is probably open to a purely sexual affair. If you are uncomfortable with this prospect, you will do better to let him know and leave it. 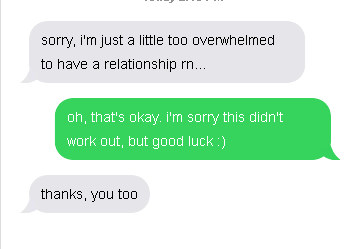 Of course, if you do not mind the lack of emotional attachment, you should pursue it.

Hopefully, this guide has given you insight into the dreaded “I’m busy” excuse. As you can see, responding accurately is not difficult in the slightest.

If you need help with your online dating profile, feel free to use our dating profile services. We cater to both men and women. Alternatively, we also offer text message feedback to ensure that your conversations are on the right track.