There’s nothing more frustrating than trying to text someone who clearly seems interested in texting you but just does nothing to keep the conversation alive. Every time he texts you, he doesn’t put any effort into asking you questions, getting to know you more, or just keeping the conversation going.

We’re going to take a look at this behavior and what it could mean. It’s a frustrating habit that many men fall into, and it can reveal a lot more about their feelings for you than what you might think.

Read on for more.

He Texts Me But Doesn’t Keep the Conversation Going

This is one of the more confusing behaviors that people exhibit when it comes to texting. It seems at once as if they are interested in talking to you (because they respond to your texts), but also that they are not (because they make no effort to continue the conversation). 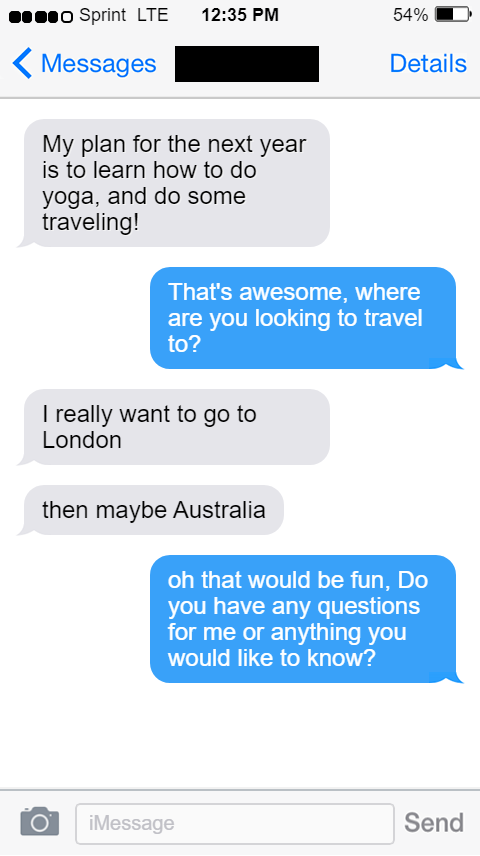 The above conversation is a classic example of this behavior. He seems enthusiastic in his responses, but he’s just not asking you any questions or making any attempt at continuing your conversation.

There’s no definitive answer as to why this happens, and the reasons behind it are often complex. It could be that they’re texting you because they feel that it would be rude not to, or they’re just keeping you hanging on by a thread because they like the attention.

He Initiates the Conversation But Doesn’t Ask Questions

So, you’ve been texting that guy back and forth, and you feel great when you see his messages. But that feeling starts to diminish quickly because you’ve noticed that, while he is responding to you, he’s not really saying anything. This happens all the time, and the easiest way to solve this problem is to find out why he’s being dull in his texts.

Let’s look at some of the reasons why he’s a dry texter.

It’s possible that he’s only replying to be nice to you and so that he doesn’t hurt your feelings. He may have liked you when you two first met, but he’s not convinced that you two have any kind of connection in the future.

If this is the case, you shouldn’t expect to hang out with him anytime soon. Some of the most common “I’m not interested” texts include:

Learn what to do if someone replies with short texts.

He may be texting you not because he’s interested in you romantically but because he enjoys entertaining women in his messages and DMs. This is fairly common when guys text you but don’t have anything interesting or substantial to say to you at all. He might just enjoy the digital company.

If this is the case, rest assured that you are not the only person he’s giving these horrible replies to. He’s probably having a ‘conversation’ with a few other girls and putting effort into responding to the ones he’s interested in.

There’s also the chance that he enjoys texting you but doesn’t say anything because he genuinely doesn’t know how to. Not everyone was born an amazing texter, and many people didn’t even start texting until later in their lives. 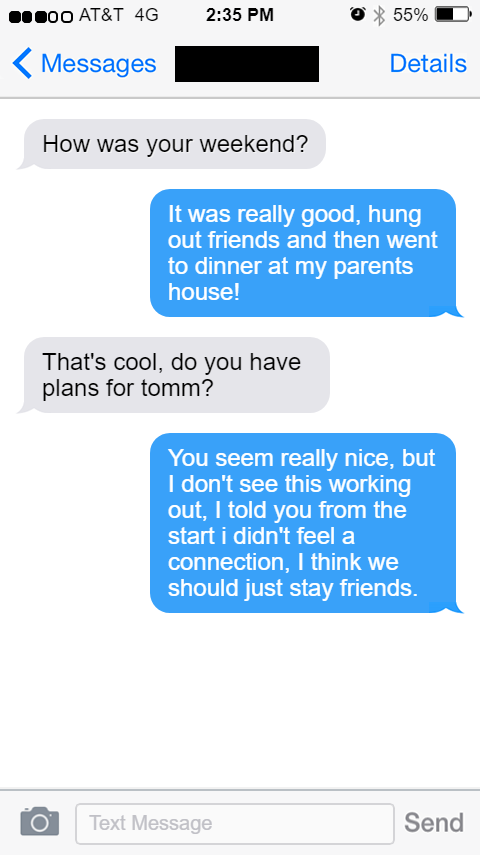 If his messages look remotely like that of the blue bubble here, he’s probably just awful at making conversation.

Of course, at this point, most people should at least be good at texting, but if you’re bad at making conversation, you’re not going to be better at it because the conversation is digital. It’s possible that he actually thinks he’s doing a good job but just doesn’t know any better. At this point, you could always let him know that he’s not doing a great job at texting.

Here’s how to keep the conversation going after breaking the ice.

He Texts Me Everyday But Doesn’t Flirt

Men sometimes make moves that are hard to explain. One of these moves is texting you even though he’s made it clear that he’s not really interested in you. Relationships between men and women come with some innate challenges simply because of the sex difference – vague texting can make things even more complicated.

Here are some of the reasons why he’s texting you consistently but isn’t flirting with you.

The friend zone is a zone you don’t want to be stuck in if you’re romantically interested in this guy. But, it might just be that he’s texting you because he needs someone to listen to him – he might even ask you for advice on topics you don’t want to talk about, like his current girlfriend or his ex.

Being friend-zoned by someone you like is never easy, but it’s a reality that you might have to face at some point. The above conversation is the clearest example of being put in the friend zone, and if your texts from him resemble the gray bubbles, then you’ve probably been friend-zoned too.

If this is the case, then you’re probably a great friend and an excellent listener, so he enjoys talking to and spending time with you. You may have more intimate texting moments and even share some inside jokes, but he always refers to you as his friend and nothing more.

Find if friend-zoning a guy is a good idea.

You could be his next option, or one of his next options if things with another girl don’t work out for him. If you want to know for sure whether or not you’re a backup plan, watch what he does because the signs will be obvious.

He might text you from time to time, but not regularly. He’s never able to hang out when you want and only spends time with you when it’s convenient for him. He always seems to be texting other girls. The signs are obvious, and you’ll know them when you see them.

Keeping you on the bench like this is called breadcrumbing, which is when he sends flirty messages but he also has social behavior that shows no commitment – in other words, he is leading you on.  Just know that you’re worth more than that, and you deserve to be someone’s first and only choice!

He needs someone to boost his ego

It’s not uncommon for men to seek approval from their friends, and you may be just one of those women that make him look good in front of his friends. Try not to take this as a compliment – it’s a huge insult more than anything.

It’s also related to their self-esteem. He might have a low self-image, so he’s looking for a way to improve it. He wants to be seen as so cool that he can have any girl he wants, or at least, that’s what he wants his friends to think of him.

To him, you’re nothing more than a beautiful souvenir, and you don’t want to be in the business of collecting dust. Don’t let him tease you. It’s best to move on.

Would a Guy Text You Every Day if He Wasn’t Interested?

As we’ve already learned, the answer to this is yes! People don’t just text other people because they’re interested in them romantically – there are so many other reasons as to why he could be conversing with you.

He might consider you a good friend; he is just leading you on for attention; he’s bored – the reasons are endless. Finding out the reason for him texting you can save you a lot of time and frustration, and if you learn that he’s not interested in you romantically, you can decide whether or not you want to keep talking to him.

If he doesn’t put any effort into keeping the conversation going, your best bet would be either to stop talking to him entirely or accept that the two of you will be nothing more than friends.

If you want to be able to craft texts that will get a response out of him and make him interested in talking to you, be sure to check out my text message feedback services. Or, if you want to get more matches on Hinge, Bumble, Tinder, OkCupid, CMB, and more, take a look at my dating profile ghostwriting services.