Ever watch the show “How I Met Your Mother?”

It’s one of my favorite TV shows.

Even after the show was canceled in 2014, I still enjoy watching it on Net Flix.

The other night was a great episode.

It was the one where Barney tries to convince Ted to design the new Manhattan headquarters for his company, Goliath National Bank.

It’s always been Ted’s dream to design a building in New York. It’s the opportunity every architect dreams about.

But when Barney offers him the project, Ted says no.

He didn’t want to get disappointed again after the same project he was hired for was scrapped a few years earlier.

Never one to back down from a challenge, Barney makes it his personal mission to get Ted to say “yes”.

To get Ted to change his mind and realize he’s making a huge mistake, Barney starts “seducing” him by using the same moves he uses to pick up girls.

Butters him up with compliments.

Then takes it away.

Even though Ted knew exactly what Barney was doing, he loved it.

He loved the attention. He loved feeling special.

So when Ted turns down Barney again about designing the building, Barney calmly informs him that it’s ok and they hired someone else for the position.

This makes Ted panic and regret his decision. He wants it more now than ever.

The next day Ted goes marching into Barney’s office and says he’ll do the project…for half the price as the other architect that they hired.

Ted eventually finds out that Barney is lying and there is no other architect hired. Barney was only lying to him to make him realize he wanted it all along.

After initially being upset, Ted decides to finally take the job after he realizes he only refused the offer because he was scared of being let down again.

I think this episode offers some important lessons that can be used to grow your business and gain more customers.

1. Realize it’s normal to be scared.

You have to look past the fear and embrace it. Otherwise, you’re going to be losing out on many great opportunities that may come your way.

2. Give your customers attention.

Fall in love with them. And make them feel special.

Barney made Ted feel special by giving him attention. He made him feel wanted and that he cared about them. That’s how you want your customers to feel.

3. Build up their desire by making your offer rare and valuable.

For example, you can offer a limited time special or a unique bonus for your product or service.

Once Ted realized he didn’t have the offer from Barney anymore, he wanted to design the building more than ever.

4, Offer something that your customers already want.

Barney was able to show Ted that what he wanted – to design the building for his company – is exactly what he was offering him.

In the end, Barney got the “yes” from Ted he wanted.

If you want more “yeses” from your customers, I can help.

During our 1-on-1 copy review, we can go to your website, emails or other content and find easy ways to improve your conversions. 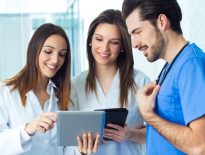